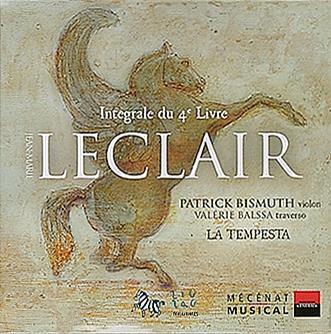 Jean-Marie Leclair’s fourth book of solo sonatas contains twelve four-movement works in the sonata da chiesa form (ten for violin, two for flute), with a delightful smattering of French dance forms set between Sarabande, Largo and affetuoso movements. But from the very opening of the A major First Sonata, violinist Patrick Bismuth shows neither the technical ability nor the musical depth to bring these masterworks to life. His sound is more often thin than flexible, and his insecure intonation is unsteady to the point of maximum irritation. A stately Adagio featuring large intervallic leaps calls for right-hand finesse and tonal sensitivity, but Bismuth’s breathless bow strokes are not flexible enough to give long notes meaning let alone appropriate bow speed.

His awkward up-bow staccatos and muddy trills in the D major Sonata [which???] have neither the bite nor the passion that a true advocate of the Baroque should exhibit. Perhaps the most irritating factor in a long list of performance don’ts is the violinist’s constant emphasis on the middle of long notes. The oft-criticised Baroque bulge does not deserve a comeback in Leclair’s delightful oeuvre. Relief in fast movements is short-lived: up-beat prestos as exemplified by the closing movement of the A major Fourth Sonata lack any attempt at dynamic variation. Perhaps the fact that the CD booklet contains no biographical information concerning the performers is no coincidence. What a pity that Leclair’s imaginative music has to endure such derision.