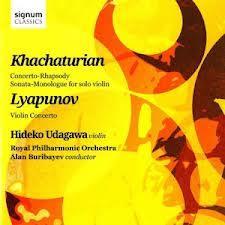 Khachaturian’s Concerto–Rhapsody is a more subtly argued and expressively shaded work than the Violin Concerto, although it lacks the latter’s raw emotional power and sheer memorability. Hideko Udagawa sounds as though she believes in every note, exchanging the squeaky-clean brilliance of the post-war generation for a Menuhin-like old-world charm and intensity. Like Menuhin at his early 1960s peak, Udagawa compensates for a less than pristine technique with a scorching musical insight that gets right under the skin of this elusive score. More impressive still is the solo Sonata–Monologue, a late work that distils the melodic orientalisms and rhythmic verve of Khachaturian’s most popular scores into captivating, aphoristic gestures, which Udagawa unwinds with a nobility that brings to mind her erstwhile teacher, Nathan Milstein.

The Lyapunov Concerto deserves to be far better known. Like Concerto–Rhapsody, it is cast in one continuous movement which at various points sounds as though it is about to break into a boldly memorable melodic statement à la Julius Conus or Arensky only to retain its Fauré-like composure. Udagawa fully embraces its tantalisingly opulent restraint and receives first-rate support from the Royal Philharmonic Orchestra under Alan Buribayev, captured in glowingly realistic sound.