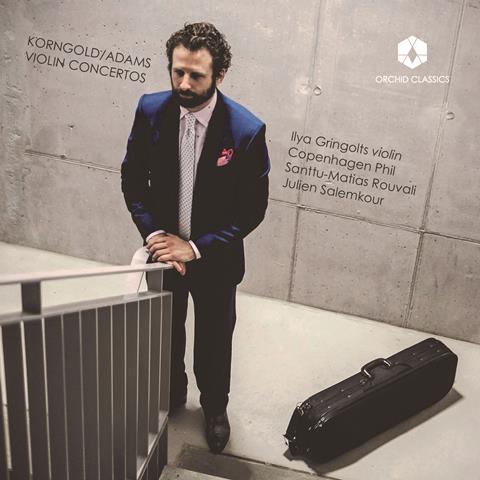 There’s not a great deal to connect these two 20th-century violin concertos other than that they are both by Californians, native and adopted, who have both striven to reassert the melodious in music. Adams’s Concerto of 1993 is still, however, fundamentally process-driven: masses of rising scales in the first movement, chaconne in the second, typical ‘waves of energy’ underlying the third. Its solo part is almost relentlessly melodic yet without much in the way of long-term memorability, and for all Ilya Gringolts’s silky-toned playing it sounds anonymous and doesn’t give him enough room to shape phrasing or expose personality. Perversely, most of the interest lies in the orchestral writing – superbly realised here by the oh-so-hiply named Copenhagen Phil under its principal guest conductor Santtu-Matias Rouvali and recorded with real luminosity.

Gringolts has more competition on CD with the Korngold Concerto, and he keeps himself on the right side of indulgence. His tone is sweet, but with an edge of tart freshness; his bowing is lithe, and interpretatively he finds the depths behind the music’s glitzy exterior without recourse to exaggeration. However, Julien Salemkour’s conducting is not immune from souping up some of the concerto’s lusher moments, though the orchestra makes a warm, supportive sound.