Is the golden age of violin making just an illusion?

Robert Lewin, The Strad's long-serving writer on the violin market, considers the ‘old versus modern' question in this article from 1964 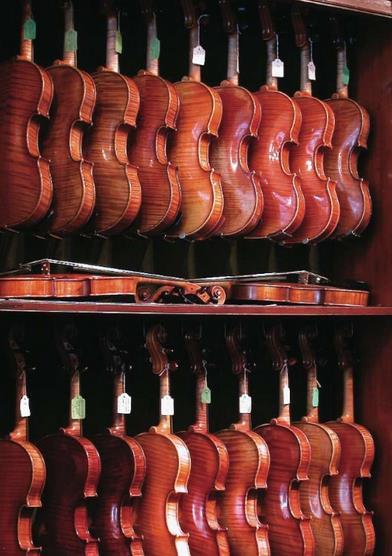 I recently gave a small dinner-party to some chamber music friends, and the viola player, after doing ample justice to the expensive viands put before him, perpetuated some unkindly denigrating reflections on the iniquities of violin collectors. With a pointed look at me, and a quick glance round to make sure his viola was safely locked away in its case, his diatribes compared collectors on somewhat unfavourable terms with wicked tycoons who collar the wheat market during famine times.

Here was a world always itching to listen to soothing violin music, a good supply of violinists on hand anxious to discharge this public need, but disgracefully frustrated by an acute shortage of fine violins. Greedy collectors, of course, the bad lot, armed with bottomless purses, had skimmed the market, shamelessly hiding their perforce silenced treasures away under dark staircases, thus depriving the world of untold aural delights. Then, in their own good time, these masters of aesthetic felony fished their ill-gotten violins out of obscurity, they exacted a pitiless toll of astronomical prices cruelly out of reach of tone-starved violinists. They then wintered in Costa Brava, no doubt intent on hatching out even more sinister schemes for the undoing of violin (and viola) players.

I have never been further south than Brighton, and my modest experience of violin collecting is that it is full of unsuspected financial hazards. The day I decide to unload something there is a marked lack of enthusiasm for that particular instrument. The violin has no tone, of course, what little it has is of poor quality, and, naturally, this scruffy, minute remnant of sound does not carry. Worst crime of all, the violin actually has a patch. Just imagine, a violin barely 200 years old, and it already has a patch in it and a few cracks.

That is the seamy side, but in justice to my viola friend’s exhortations, there is another side in which the picture of the world being held up to ransom rings singularly true. If you are lucky enough to own a fine example of a great maker in an unusually pure state of preservation you have a resilient and effervescent investment indeed. The violin is sought after at almost any price, and you yourself find you have become unexpectedly socially endurable. Everybody wants to know you and continually asks after your health (no doubt hoping you are on your way out and the violin will soon come their way). People from the ends of the earth write pointless letters to you ending: “any time you are thinking of disposing of your…”

If these are the violins of which there are not enough to go round, why this universal desire for them, when there are plenty of others about? When you can visit a dealer’s shop you can hardly get in for violins. They overflow from the showcases on to the floor, making your journey from the shop door to the counter a perilous one. The basement is chock-full, and space is so scarce there is a notice begging you not to bring in a double bass or anything bulky. The sight of all this plenty cheers you up and you whisper in the dealer’s ear: “Have you got anything?” He shakes his head sadly: “Nothing at all,” he says.

You know just what he means. He has got stacks of violins, well-made, healthy, and nicely set-up, but he does not waste time telling you these are just as good as what you are after. He knows it is useless offering you anything other than a fine violin.

This expression, in the violin world, has no reference to nicety of shape or finish. A fine violin is one that is the product of the one country so renowned for that job, and was made there during one tight period lasting rather less than 150 years, called the golden period. Almost everything relating to the quality and assessment of these violins has come under the fierce light of bitter controversy. Many people who have spent their lives playing, handling, and thinking violins, assert that the whole set-up is a vast hallucination. Just as people in ancient days had their witchcraft and superstitions, so we in our times indulge in the fanciful notion that Italian-made violins from about 1650 to 1800 must excel all others in tonal quality. The craftsmen making new violins were naturally interested, and they threw out a challenge. That was to conduct tone tests.

A number of these tests in which new violins were matched against old ones took place. The competition was strictly fair. A distinguished player was engaged, and he played the same piece on each violin in turn under exactly the same conditions. He played behind a curtain, and in one test he suffered the additional indignity of having his eyes bandaged to ensure he was not pulling any tonal punches.

The audience voted their preferences, and the results were amazingly uniform. Almost invariably the new violin came first, and the hatchet-faced, practical, no-nonsense men who had confidently prophesied this would happen went home in triumph.

Their victory was short-lived. The day after the test, there was no dramatic slump in the price of old violins, with renowned collectors spectacularly throwing themselves from the top floors of their ruined establishments. Incredibly, the violin world ignored the tests and continued to pay even steeper prices for the old masterpieces. Once again, the obstinate tradition of the golden period had survived the obloquy of good, hard, common sense.

It is easy to poke fun at the idea of tone tests, with people marking their cards as if at a race-track. Ideals of beauty always evade any attempt at logical judgement, but musical sounds are particularly elusive. The tonal quality of a fine violin is subtle and immeasurable; although its function is to project sound, its tone cannot be precisely identified and assessed at a distance. There are too many distracting and unknown factors. Some of these operate to the advantage of the violin, some quite the opposite. A sound hard and coarse under the ear, i.e. at its source, does not necessarily sound so to the listener; the impure and “noisy” part of the sound may lose itself en route. A violin that sounds loud and full nearby can sound feeble a short distance away. Besides these complex variations stand such imponderables as the idiosyncrasy and passing mood of the player.

When you listen to a series of violins in quick succession you can only guess; the player can unconsciously favour one instrument and fail to impress with another. The acoustics of the hall and the varying resonating properties of its furnishings and contents all combine to bewilder the audience, and the listener tends to escape from his tonal dilemma by voting for the instrument that sounds loudest. That is most likely to be the new violin.

To those who hold fast to the belief in the golden tone it is the player who knows, and even he only slowly learns the tonal secrets of a fine instrument after much intimacy with it. The fine violin does not parade its qualities. Its fabled reputation of ravishing the senses irrespective of who plays it is nonsense – the writer who says something he knows the reader will want him to say. The tone can be rare, dry-sweet, velvet and joyously spring clear, but that is far from all. It is also “responsive”. Like two friends who got on well together, the old violin conjures the best out of you, and helps you to do just what you want it to do. These are the intangible qualities that have endeared so many generations of violinists to the violins of the golden period.

But now we come to a new problem. These high prices, these kings’ ransoms, the irresistible desire to own one of these, do not apply themselves to all the violins of the golden period. (It is only to the finest of the fine that has come this superlative allure.) What has happened to the others – the remainder of the little army still surviving from the authentic period. Like mine, they have acquired some patchwork over their long playing life – must we condemn them for that?