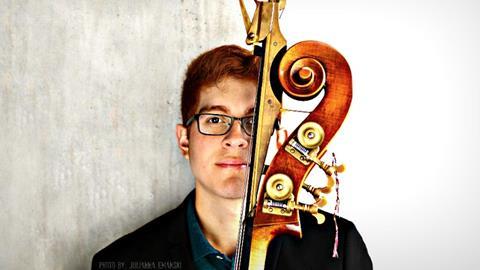 The International Society of Bassists (ISB) has named the winners of its Performance and Makers competitions, held on 5 and 6 June in conjunction with the ISB 2017 Convention at Ithaca College, New York.

Aaron Olguin (pictured), a graduate student of Gudrun Raschen and Jeff Bradetich at the University of North Texas, was awarded the Gary Karr Prize in the Solo Division of the Performance Competition - including a cash award of $2,500, an expenses-paid recital to open the 2019 ISB Convention, and a new bow by Vladimir Radosavljevic valued at $6,000.

The Scott Lafaro Prize in the Jazz Division, including $2,500 and an expenses-paid concert to open the 2019 ISB Convention, went to Luca Alemanno. First prize in the Orchestra Division - a paid week with the Atlanta Symphony Orchestra - went to Adam Attard.