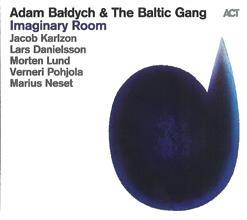 Young Polish violinist Adam Baldych is beginning to make a name for himself, and the calibre of this line-up – featuring leading Scandinavian jazz musicians such as bass player Lars Danielsson and the acclaimed young saxophonist Marius Neset – certainly promises good things.

In fact, the odd feature aside, the more established stars aren’t overly prominent, more often adding chamber colour to Baldych’s brand of groove music that dips its toe into rock and Eastern European folk. Baldych himself has the range of tone and style to carry this off with aplomb: his meaty, earthy sound on the opening Village Underground gives way to a more languid approach in Mirrors, before becoming hazier and wispier later on. In K8 the odd pitch-bend and melodic turn suggest but never ape the swing and folk traditions, while his long, fluid lines of improvisation throughout the album, though occasionally resorting to filler material, are hip and unusually fluent.

His writing and sextet arrangements are good rather than knockout, and the same could be said of the ensemble, where the group playing is strong but the solos are a little unmemorable. But it’s worth hearing just for Baldych – definitely a jazz violinist to keep an eye on.