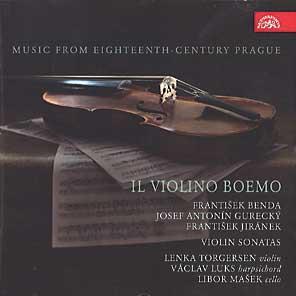 Lenka Torgersen offers strong, meticulously prepared readings of these pieces, which display remarkable flair and imagination. Her articulation, smoothly contoured phrasing and subtle rubato serve František Benda’s music particularly well and result in a highly developed feeling for line, notably in the Largo and Amoroso of his Sonata in B flat major and the Cantabile movement of the A major Sonata, now believed to have been composed (originally for flute) by Carl Graun. Benda’s C minor Sonata, Josef Antonín Gurecký’s four-movement D major work, and František Jiránek’s C major Sonata are the most technically challenging in her programme, but she is more than equal to their demands, demonstrating remarkable facility, style and conviction, especially in their finales.

Throughout tempos are largely well measured, intonation is secure, and the warm, refined tone of Torgersen’s c.1760 Sebastian Klotz violin is enhanced by her relaxed interpretative approach in which embellishment, whether melodic or cadential, is well to the fore – however, more dynamic contrast would be welcome. Václav Luks accompanies sensitively, joined in the Gurecký and the two echt Benda works by cellist Libor Mašek, and the ensemble is exemplary, bringing out pertinent interior detail and combining shapely phrasing with lucidly balanced textures. The recording, captured in a Prague church acoustic, is clear and resonant.