Holt: Third Quartet, Dennehy: The Weather of It, Gilbert: Haven of Mysteries 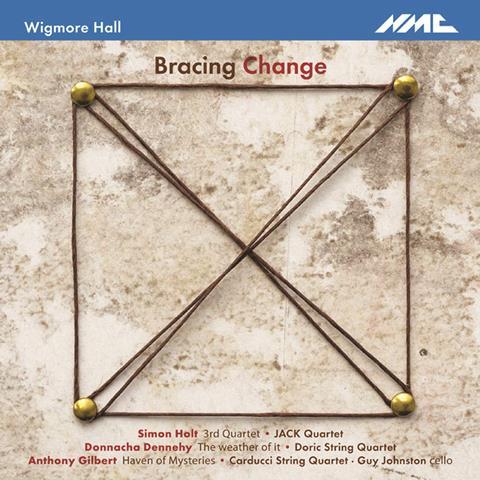 Wigmore Hall shows its commitment to developing chamber music repertoire with Bracing Change: three works co-commissioned by the hall, NMC and the Radcliffe Trust. In recordings taken from live premieres, three young ensembles heighten the drama and distinctive voices of a lively mix of works written in the past five years. First is Simon Holt’s Third Quartet. The evocative titles of its six movements conjure up theatrical and vivid imagery, intricately detailed by the excellent Jack Quartet, from the spectral, high-wire yearning of ‘Adder to the moon’ to the choppy deliberations that build to driving chaos in ‘A forsaken cry’. The shifting waves of sound in the final movement, ‘Night’s mantle descends’, show the players at their expressive best, breathing together to create Holt’s blissfully expansive gestures. In Donnacha Dennehy’s tender, single-movement work, The Weather of It, a sense of a driving pulse that nods towards Philip Glass is never far away, faltering and fading only to re-emerge. The players of the Doric Quartet chart its ebb and flow with power and sensitivity, and relish the occasional swelling melodies.  Lush textures abound in Anthony Gilbert’s Haven of Mysteries, for which the Carducci Quartet is joined by cellist Guy Johnston. The interpretative flair of these fine young players shines through, making Gilbert’s sensuous chromaticisms sing. Here, as throughout this compelling disc, recorded sound is crisp and clean, and charged with a thrilling immediacy. CATHERINE NELSON