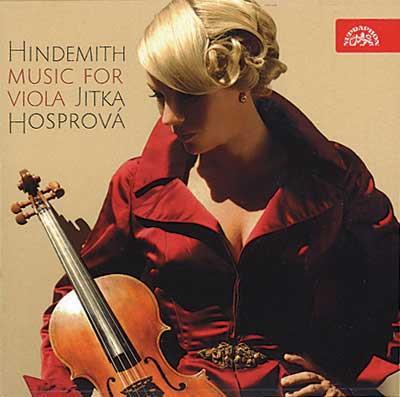 Arriving at the tail-end of numerous recordings marking last year’s 50th anniversary of Paul Hindemith’s death, this CD presents some of his best-known viola compositions. As the informative but not always accurately translated booklet notes rightly observe, the composer wrote them for his own use as a concert soloist, and they thus give a fair impression of his playing style, which was imbued with the principles of the post-Romantic ‘New Objectivity’.

Even in the hothouse atmosphere of the opening Fantasie of op.11 no.4, the earliest piece here, Jitka Hosprová avoids any over-the-top mannerisms, making it a piece with the variations on a faux-folk song theme. In the two unaccompanied sonatas, she takes moderate tempos for the most part – a justifiable exception being the movement famously marked ‘Frantic tempo. Wild. Beauty of tone is of secondary importance’ – and thereby achieves an uncommon structural clarity. Her well-focused tone perfectly suits her slightly poker-faced performances, which are however not lacking in Hindemithian mischievousness.

Having enjoyed Jitka ÄŒechová’s thoughtful pianism in op.11 no.4, I would have favoured another piano-accompanied sonata to round off this vividly recorded CD, but the conductorless Prague Chamber Orchestra makes its mark in a heartfelt reading of Trauermusik.