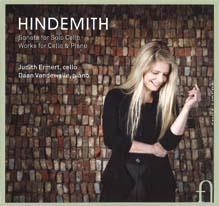 Despite the distinguished advocacy on disc of many fine ensembles, Hindemith’s seven string quartets have failed to establish themselves in the regular playing repertoire to the same extent as, say, those by Bartók or Janá?ek. This is due partly to the fact that the series does not form an even biographical arc and also, I suspect, thanks to Hindemith’s undeserved reputation for being rather earnest and academic. This fine coupling of the Second and Third Quartets (the first recording in a complete cycle), both composed shortly after the end of the First World War when Hindemith was still in his mid-twenties, is therefore especially welcome.

During this period, Hindemith fused Baroque contrapuntal ingenuity with Classical formal balance to form a structural backdrop against which to set his stylistically wide-ranging ideas, from neo-Classical déjà vu to Expressionist angst. These are enormously challenging (and rewarding) scores, which makes the Amar Quartet’s achievement all the more impressive. No matter what Hindemith throws into the mix, this talented ensemble somehow manages to hone in on the leading voice, unravelling even the most densely complex of Hindemith’s textures with virtuoso ease, including the opening movement of no.3, with its eerie, siren-like descents and threatening pizzicatos. A triumph that is accorded undistractingly natural sound.