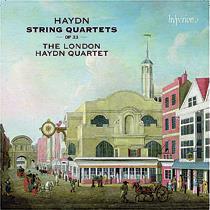 Playing on gut strings and with Classical bows, the London Haydn Quartet has reached op.33 in its survey for Hyperion of the Haydn quartets. As in the previous three releases the group has returned to an 18th-century edition, in this case that by the Amsterdam-based firm of Joseph Schmitt. In this 1782 publication the scherzos of all the op.33 quartets, including those of nos.5 and 6, come before (not after) the slow movement. Any edition approved by the composer could be seen to offer an ‘authentic’ snapshot, but it’s not so clear why the performers have nailed Schmitt’s colours to the mast, other than their view that the edition offers ‘a rare visual fluency that seems to suit this colourful music’.

However, the sound is warm, well captured, and almost always beautifully in tune. The ‘visual fluency’ of which the players speak palpably translates into the playing: the melodic lines are broad and often lead to absorbingly distended, enveloping moods. But the flipside is that we miss the moment-to-moment transformations of colour, leading to what some may hear as two-dimensional readings. That said, the group opens up fascinating possibilities in terms of articulation. These may not be benchmark discs, but they offer food for thought to anyone who thinks they know these quartets.