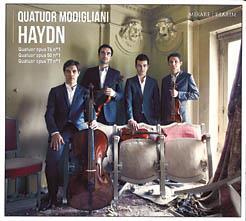 I waxed lyrical about the musical insight, unanimity and polish of the Modigliani Quartet’s first Haydn disc in 2008 (see The Strad, October 2008). This ensemble’s recent Haydn release confirms my opinion, even if it exposes some corporate intonation issues in need of some buffing, particularly in op.50 no.1.

The Modigliani players capture well the martial air of the first movement of op.77 no.1, use agogic accents to excellent effect, create a magical moment at the hushed reprise, in D flat, of the Adagio’s theme and find a fund of impish humour in the finale. They respond sharply to the drama and rhetoric of the Adagio of op.76 no.1, making its syncopations more unsettled by driving the pulse forward, and their volatile, highly strung playing makes for vivid results in the finale, dispatched with thrilling elan.

Leader Philippe Bernhard brings his own brand of flamboyant virtuosity and unpredictable spontaneity to the proceedings, for example in some first-movement passagework in op.76 no.1 and in the Adagio of op.77 no.1, and his rhythmic flexibility sometimes keeps even his colleagues guessing, notably in the Trio of op.76 no.1. Overall, these are searching, if occasionally idiosyncratic readings well caught and satisfactorily balanced by Mirare’s engineers. The occasional moment of impure intonation is a small price to pay.