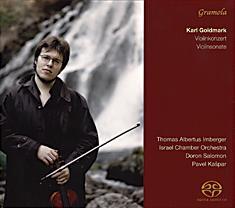 Goldmark’s Violin Concerto may have suffered from neglect of late, but performances on record include some fine playing, as in Arnold Rosé’s breathtaking fragment of the first movement, and a blistering rendition by Peter Rybar. The work is full of passionate yearning, and its delicate gestures are well captured here by Irnberger, a former pupil of Ivry Gitlis, and his colleagues. The slow movement is particularly fine, as is the opening of the finale. I do feel, however, that the heroic and at times stark drama of the first movement is underplayed – it’s all much too beautiful – and this rather misses the point. The Violin Sonata has similar virtues and shortcomings. Irnberger captures the otherworldly element of Goldmark’s writing very well in the first movement, and there is some lively playing in the finale, but the middle movement rather lacks purpose.

Overall, he plays with a wonderful sense of colour and an engaging honesty, although his G-string vibrato can be a bit crude and I would have preferred more fire even at the expense of tonal beauty. Gramola’s rather distant (if immaculate) engineering hardly helps here – but, overall, the disc is worthy and contains some lovely playing.