From the archive: Teachers to Avoid 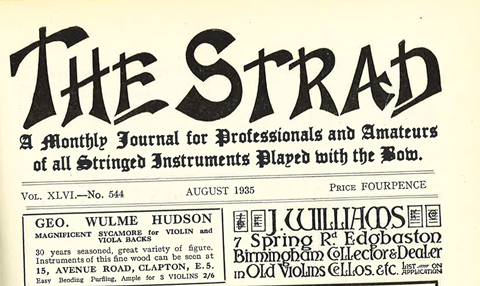 Avoid the ‘Professor’ of Music unless he really be a Professor. It is an old, petty trick to gull the unsuspecting: you can conclude that one who has to make misrepresentations of this kind to gain pupils is likely to be very small beer as a teacher.

If you are a parent shun the teacher who goes into ecstatic raptures about your child’s playing and promises to make a Kubelik or Heifetz of him in a short time. On the ratio of violinists of this class to the population it is about sixty millions to one against him fulfilling his promise. For all that the flatterer-teacher invariably prospers: the fond parent so easily believes his to be wonder children.

And if you are a student, with concert-hall ambitions, avoid the teacher or manager or agent who promises you a golden key to recognition and fame. There are no such golden keys… Way back in 1908, Kreisler (in an interview) said in the October issue of The Strad ‘I am thirty-three now, and from the age of twenty to twenty-seven I struggled hard for recognition, though I played every bit as well then as I do now.’ It is illuminating!

Avoid the foreign teacher just because he is a foreigner. It is only by implication that Friedrich Schmitt is a better musician than Fred Smith, as it is only by tradition that Vienna is a more musical city than London. Indifferent we may have been in the past, but at the present time our schools are amongst the best in Europe: and in the general way our teachers have a virility that is better than the sometimes ambulatory Continental methods, better for a British pupil, at any rate.

In my experience foreign conservatoires and their principals do not handle our youngsters to the best advantage; they are suave and unremittingly polite at all times; they treat one more as a guest than as a pupil. If you go unpractised to a teacher in Munich you’ll be gently chided – in Manchester you’ll be curtly ejected and told to come again at such a time when you’ve worked adequately. In the former case, conditions being so amiable, you’ll probably go on slacking, in the latter you’ll work, since the most adamant pupil couldn’t stand forever being ‘chucked out’. It’s a point of British psychology.

If you have a young child beginning the violin or ‘cello avoid a cheap, unskilled teacher on the reasoning that anyone will do for a start. It is a mistake not to get as good a teacher (and instrument) as possible from the beginning, for then is the time when ineradicable habits are formed. A famous teacher once said ‘music teachers ought to be promoted down’ – teaching children being the most difficult vocation, only the gifted members of the profession should undertake the task.