From the archive: classic and modern violins compared

A report and subsequent correspondence in The Strad, 1935, show that instrument blind tests offered provocative results even then 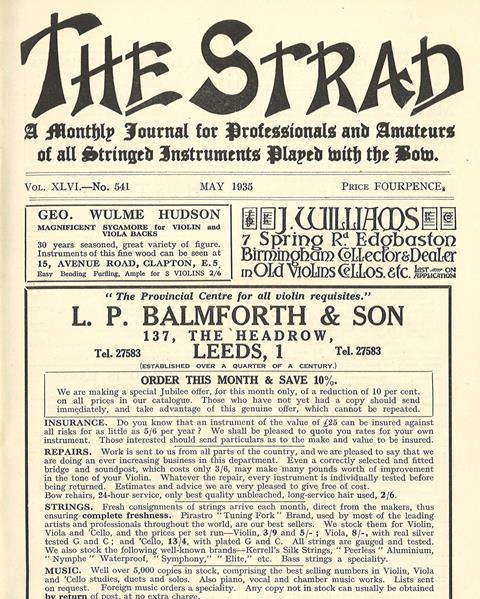 At the London Musical Club on Friday evening, March 22nd, in the presence of a numerous and representative gathering, a number of classic and modern violins were arrayed in contest for the purpose of discovering whether the high esteem in which the former were usually held could be justified. The method pursued was the performance behind a screen of a number of short extracts from pieces selected to test violin-tone in its various aspects. Each of these passages was played on all the violins in succession and the audience was invited to give marks in accordance with their estimate of the tonal qualities of each instrument.

In introducing Professor Stanislav Frydberg, who undertook the performance, Mr. M. Montagu-Nathan (Director-Secretary of the United Arts Society) assured the audience that the sole object of the demonstration was to ascertain the truth. He admitted that should it be discovered that the tonal quality of new violins could in any way be compared with that of classic instruments he would welcome such a discovery, since it might result in a benefit both to players and to contemporary craftsmen. A singular proof had been furnished by the experience of a well-known collector of old violins who, growing alarmed at the frequency with which he was asked to lend his Strad for public performance, had caused a copy to be constructed, with the result that players on this instrument who were unaware of its origin had experienced all the exhilaration afforded by the violin on which it was modelled.

There were in all ten instruments. The classic type was represented by three Strads, one Joseph Guarnerius and a Gabrielli; the moderns were by the following makers: Beare, Voigt, Hudson, Hoing and Rost.

The result of the system of marking was exceedingly interesting. The Strad example, which was placed third in respect of the number of supporters who considered it to possess the best tone, secured the most votes for second place, and its aggregate marks for first, second and third place were highest, by one mark, than those accorded to the winner. This instrument (by Rost) was undoubtedly the favourite and it succeeded beyond question in establishing the claim of the modern example to the violinists respect. The second place was gained by a Gabrielli and the third by a Strad.

It was evident throughout the evening that the test could not be accepted as a conclusive proof of superiority from all points of view. It became clear that the question of personal taste must always remain a factor in the matter of choice. Further, it was mentioned by Professor Frydberg that the quality of the strings on one of the classic violins was conspicuously inferior, and it was, of course, obvious that the carrying power of the instruments was not fully tested. The principal importance of the demonstration emerged in its proof that modern violins, as has been shown on previous occasions of the sort, can undoubtedly rival the old instruments, and as Mr. Montagu-Nathan observed, it was satisfactory to learn that one could acquire a violin worthy of use in public performance at a reasonable price. The interest in the demonstration, which was attended by Mr. W. W. Cobbett, Miss Wienawska, Mr. Alfred Moffatt, Mrs. Anthony Jeffreys, Mr. Zacharewitsch, Mrs. Le Marchant and Dr. Ernest Whitworth, was fully sustained throughout the evening.

To the Editor of The Strad

Dear Sir, – It is surely not enough to say that the tone of one violin sounds better than that of another to an audience. Tone is a subtle thing and the appraisement of tone is largely a matter of education and experience.

Again, the player is just as intimeately concerned with the ease of production as he is with the quality of the tone. Of immense importance to him is the certainty with which the effects he is aiming at can be achieved.

This is where the good old violin scores over the good new violin every time.

The old violin, if a worthy example of the art, has lost all its crudities. It responds to a touch of the bow. It possesses an infinite variety of tone colour, has carrying power without stridency and all-round reliability in the various registers which means so much to the solo performer.

Are these qualities ever found in combination in a new instrument? I think not, but I am open to persuasion as I think that the cult of the antique in violins, as in other crafts, may be sadly overdone to the detriment of our modern luthiers.

More tests similar to that held at the London Music Club on March 22nd should be held but let us hear the opinion of the player as well as that of the listener.

To the Editor of The Strad

Dear Sir, – How often does this controversy arise in your pages, with ever-apparent freshness, and how often are certain facts overlooked.

Yes, we should all have super-Strads or Josephs for choice, but there are not sufficient to go round and, in fact, there are but few super-instruments of either make, and quite a lot of inferior ones, damaged, in many cases, through misuse and ignorance.

The argument that all the great players have used these super-instruments is correct, no one would do otherwise than agree upon such an obvious fact, but such an argument should not be allowed to dim the excellence of certain modern violins – for instance, as made by Mr. Richardson – as such arguments are likely to do, and prevent a honest, hard-working fiddle-maker from getting a living, because the world is alive with unscrupulous fiddle-fakers, who play up on the fancy of violinists and eventually sell them fakes, although, of course, quite good playing violins.

The fact to keep in mind is that Stradivarius made good new violins, in fact the best new fiddles existent at that time, and they were good when they left his workshop. To-day fiddles equal in excellence of construction of Strad and very similar in tonal qualities are being produced by Mr. Richardson, of whose violins I have handled about 20. Therefore, if you cannot have a super-old master why not invest in a super-new master, which will continue to improve with the years.

I have thrashed out this old fiddle and new fiddle theory quite a lot, and never lose an opportunity of trying one against the other, and I have had the opportunity on three occasions of trying a Richardson against a whole battery of master fiddles, £12,000 worth, a Strad, Guarnerius, Amati, Rugeri, Sanctus Seraphin, Pressenda and others, and out of the room I can assure you one could not tell the difference in the Strad and the Richardson, but under the ear – well that was quite another matter, and one would expect something exceptional in a £4,500 fiddle, the sensitiveness of the Strad was a delightful revelation, but the owner of the said Strad told me he had seen and handled 40 Strads before buying this one, which had occasioned him special visits to London on each occasion, not by any means within the scope of the average violinist.

In drawing comparisons, therefore, with the final choice of the great artists, some allowance should be made for the difficulty and great pains taken to acquire even a great super-fiddle, as you do not walk into the shop and walk out again with just exactly what you require, and furthermore, what might suit Kreisler might not suit Sandler or Sammon – violinists as a whole are a peculiar folk. Therefore to the ambitious player who has only moderate means he should carefully explore the productions of the best modern makers before being too completely led astray with the bogey of the old fiddle being the best, there are good old fiddles and bad old fiddles, likewise with new ones. It is better for the dealers to handle old fiddles because the value is not fixed, but I think it is better to make a friend of a good modern maker and he will eventually find you a fiddle to suit your taste, which if taken care of, will some day, with age, possibly have that rare sensitiveness