From the Archive: an Alexander Despine violin, Turin 1828 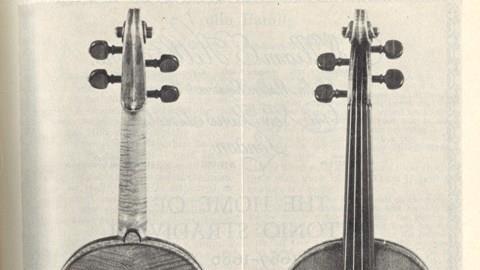 This illustration of an Alexander Despine violin was published in The Strad, July 1970. The following text is extracted from the article accompanying the photographs:

Alexander Despine was active little more than a century ago, but there is little reliable information on him. Several writers mention that he was a pupil of Pressenda, but this is most unlikely, as they were approximately the same age. It seems more likely that he was already an experienced maker when he entered Pressenda’s employment. Another theory is that Despine was a Frenchman who had received his training in his native land before emigrating to Italy.

There is no doubt that Despine’s accurately built and highly finished violins resemble, at first sight, those produced by a number of the best French makers during the early years of the last century, but a closer study reveals a certain freedom of treatment which is one of the major attractions of an Italian violin.

Illustrated here is a strikingly handsome violin by Despine, which according to its label was made in Turin in 1828. It is in virtually mint condition, and is generously covered with a lustrous red-brown varnish.

After Pressenda and Rocca, Despine is now one of the most sought after of all semi-modern Italian makers, and his instruments are rapidly appreciating in value. Fortunately for posterity he was content to follow the design of the greatest of the old Cremonese masters: Guarneri and the later models of Stradivarius.