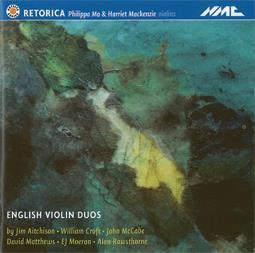 Inspired by friendships with composers John McCabe and David Matthews, this young British violin duo has fashioned a disc of English music through the centuries. The earliest piece is the Fourth Sonata by William Croft, an 18th-century church musician by trade, who probably composed the work for recorder duo, but the performance here is played without vibrato to simulate a pair of Baroque violins.
Jumping forward to 1930 for E.J. Moeran’s Sonata, Retorica brings admirable lucidity to the complex intertwining of the two instruments, made easier for the ear to appreciate by the inherently different tonal quality of their violins. The high degree of dexterity required continues into Alan Rawsthorne’s Theme and Variations from 1938, where clean intonation is put to the service of a fascinating and often acerbic harmonic language.
The players are equally persuasive in the 21st century with McCabe’s Spielend (German for ‘playing’), in which they play a dangerous game of testing each other’s virtuosity. A mixture of musical pictures in David Matthews’s Eight Duos, and an attractive Syruw composed three years ago by Jim Aitchison, complete the disc.
This is an unusual release, but excellently played and one that I have greatly enjoyed getting to know. Reverberation is just on the right side of acceptability in up-front sound.