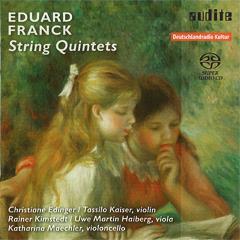 Audite’s laudable exploration of the chamber music of Eduard Franck (1817–93) – previous releases have focused on his string quartets, sextets, violin sonatas and piano trios – continues with the two string quintets, which are both scored for the Mozartian ensemble of two violins, two violas and cello. The first dates from the mid-1840s, and while the influence of Franck’s teacher Mendelssohn is never very far away (particularly the latter’s penchant for hyperactive accompaniments), this expertly scored work is ideally pitched at the burgeoning middle class’s insatiable desire for amateur chamber music in the home. The Second Quintet emerged a quarter of a century later and is stylistically more independent and assured, including an unmistakably Schubertian emotional ambivalence most evident in the theme and variations finale.

More than usual, complemented by Audite’s lucidly natural engineering (the effect is stunningly realistic on SACD), this fine ensemble relishes the enhanced richness of Franck’s alto and baritone registers. Although the melodic interest is almost invariably focused on the violins, one is struck continually by the enhanced presence of the violas and cello. These remarkably assured and adept performances are brimful of confidence, although I would have occasionally welcomed a greater sense of surging insistence when the music takes flight.