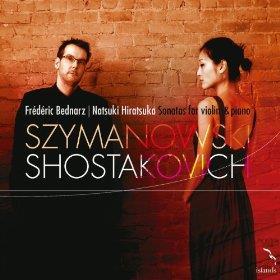 In ‘Eastern Impressions’ (ARS Produktion ARS 38 147), German violinist Katrin ten Hagen and pianist Christina Wright-Ivanova have drawn together works by Prokofiev, Janácek, Bartók and the Bulgarian composer Pancho Vladigerov that celebrate the folk tunes of their respective countries. In Prokofiev’s 1943 Violin Sonata no.2 (an arrangement for David Oistrakh of the Flute Sonata), ten Hagen’s sound is attractive and she brings an enthusiastic, sprightly touch. It’s a highly attractive performance but there’s some restraint in coloristic effect, and the formal shape of the first movement feels levelled out. Thankfully, no holds are barred in the boisterous and challenging Allegro con brio finale. Ten Hagen lends plenty of punch to Janácek’s Sonata, though her playing is detailed rather than rugged, and some might prefer a fatter sound in places. There’s a convincing rustic swagger to the first part of Bartók’s Rhapsody no.1 and ten Hagen’s performance of Vladigerov’s Bulgarian Rhapsody is equally persuasive in the impassioned, bow-blurring folk material and the passages of lyrical poignancy. The recorded sound is closely detailed, well balanced and natural-sounding.

Moving further east, young Montreal-born violinist Frédéric Bednarz and pianist Natsuki Hiratsuka make a strong impression in contrasting the late-Romantic style of early Szymanowski with the dark, sparse territory of late Shostakovich (Metis Islands MIM 0004). Comparing the disc’s first and last tracks emphasises the contrast. Szymanowski’s Allegro moderato has Romantic grandeur, which Bednarz conveys with flair. In Shostakovich’s slow, searching passacaglia finale, Bednarz maintains a sense of gravitas as well as enigma. Together with Hiratsuka, he creates a powerful atmosphere around this often arid soundscape. The second movement is a devil’s dance, here relatively unsneering but still effective, and technically assured. Bednarz brings a gorgeous tone to Szymanowski’s lyrical slow movement, the high-lying writing drawing sustained sweetness. In this movement and the next, Hiratsuka’s neat handling of the often dense texture is key. The disc’s trayless digipack presentation means that there are scant notes on the works or artists, but the recording itself is clear yet spacious. A highly recommended release from an instinctive musical partnership.

It’s hard to understand why Khachaturian’s was denounced as ‘formalist’ in 1948 in Hideko Udagawa’s selection of the Armenian’s works (a reissue of a disc first released in 2003 by Koch International). The Violin Sonata is the key focus – boldly expressive and with a distinct folk colouring in this performance – appearing alongside the rhapsodic Song–Poem and a number of transcriptions, not least the inevitable selections from the ballets Gayaneh, Spartacus and Masquerade.