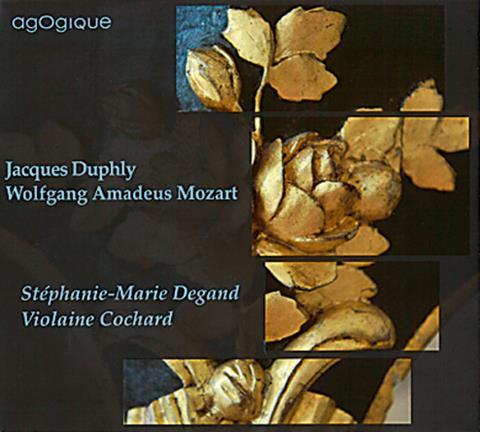 On paper the coupling of character pieces by Jacques Duphly (one of Paris’s most renowned harpsichordists during the instrument’s so-called golden age) with Mozart’s first four sonatas for keyboard and violin seems an unlikely one, but several fascinating interconnections, fully explained in the booklet notes, make this marriage work.

Stéphanie-Marie Degand and Violaine Cochard exploit to the full the expressive potential of their period instruments – a 1776 harpsichord by Christian Kroll and a 1770 Giuseppe and Antonio Gagliano violin, with bows appropriate to the repertoire. They combine stylistic sensibility with vitality and insight and offer trim, alert and sensitively inflected accounts of Mozart’s sonatas K6–9. Even if Cochard dominates the musical argument, Degand consistently enhances the texture with pertinent comment. Particularly enjoyable are the Adagio of K7 and the same sonata’s perky second minuet, but the dramatic opening of K9’s Andante and some of the imitative textures in K8 are also delightfully conveyed.

Their considered accounts of Duphly’s works radiate real empathy with the idiom. Highlights for me include the Ouverture, remarkably tidily dispatched, La de May and La de Casaubon, the latter emerging as one of the less melancholic society portraits. Intonation is generally good and the recording combines immediacy with an attractive ambient warmth.