Double blind tests – the inside story

What really happened in an Indianapolis hotel room with six top violins? Ariane Todes reveals all 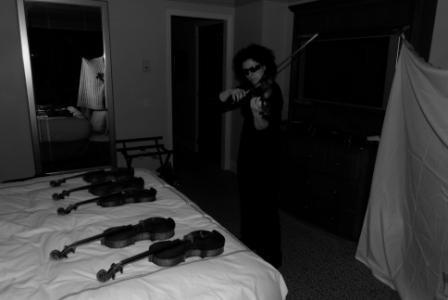 For the last few days worldwide media have been in a twist about research that seems to prove that violinists can’t tell the difference between a modern violin and a Stradivari. As ever, it’s not that simple. I should know – I was there. On my visit to the Indianapolis Violin Competition last year, I spent an hour in a hotel room with goggles on, playing six fiddles – three moderns, two Stradivaris and a ‘del Gesù’.

I’m not a professional violinist, but I studied at the Royal Academy of Music and nearly became one. And as editor of The Strad for the last five years, I’ve been privileged to hear the greatest players on the best instruments, and to play some of the finest instruments in the world. Does any of this disqualify me from counting in such research? It's an appropriate question. After all, who is best-suited to judge sound? An instrument geek who has a library of classic violin sounds in their memory? Someone with fresh ears? A top soloist who knows how to project to the back of a hall? A chamber musician who looks to blend? Any of these factors might have a profound bearing on the outcome of such a study.

I remember coming out of the room exhausted by the mental effort of hearing, verbalising and choosing continuously for an hour. There’s a bell curve in attention levels with such an experiment. At the start it takes a few minutes for the ear to tune into each of the characteristics you’re being asked about and to sort them out. After a few goes, you get your head round it, but then fatigue and self-doubt set in. Are you judging consistently? Are you focusing evenly? Are you remembering accurately? Are you picking up subtle clues from the worn feeling of the fingerboard, the smoothness of the neck? Is your agenda to prove your own knowledge, or are you truly open to the experience?

The good news is that I was largely consistent – the instrument I chose to take home at the end was the 'del Gesù'. And for the pair comparisons in the first round, I always chose the 'del Gesù' over the modern instrument, although I often chose a modern instrument over the Stradivaris. I assumed the 'del Gesù' was a Stradivari because I thought I found it difficult to play initially. Strads do require special attention technically, which might explain the lack of positive results for them, and provide an argument that such tests should use players who are used to getting the most from a Strad. Or the opposite.

My comments about the ‘del Gesù’ were, ‘There is a solidity to the sound, a core which is sweet. It plays nicely quickly,’ although elsewhere I described it as hard to play. In retrospect, I also question using the word sweet – did I genuinely think that or was my notion that it was a Strad influencing me? As with other participants, my answers slightly favoured the modern instrument known as M2 – I thought it was the most playable and that it could be a ‘del Gesù’.

What does the study prove? It's a stretch to get to the myth-busting generalisation that violinists can't tell a Strad from a modern instrument. There are too many philosophical issues and variables to be definitive about that. However the data clusters around a popular modern instrument and an unpopular Stradivari force one to consider the preconceptions that are so hardwired. Although of course, here at The Strad, it comes as no surprise to us that modern instruments can sound fantastic.

Taking part in the test showed me that it’s exceedingly hard to be objective, consistent and fair, but that maybe there's nothing wrong with a bit of subjectivity, as long as it's honest. And that I should have asked for a ‘del Gesù’ for Christmas.

For more details about the experiment and to find out how to set up your own blind test, read Joseph Curtin’s article in the February issue of The Strad, out 20 January.