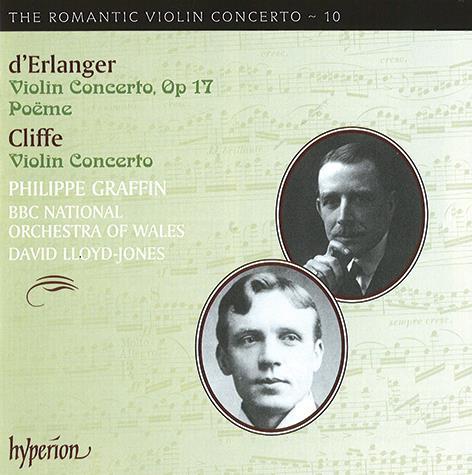 I can’t imagine I’m alone in having never heard a note of Frédéric d’Erlanger (1868–1943) or Frederic Cliffe (1857–1931), so hats off to Hyperion for having unearthed two such worthwhile obscurities from the rich musical pastures of English Victoriana, and to Lewis Foreman for his invaluable booklet notes. D’Erlanger was a widely performed composer in his day as is evidenced by the fact that his 1902 Violin Concerto was taken up by two of the greatest players of the time: Fritz Kreisler and Albert Sammons. Cliffe’s creative light burned brightly for a brief period during the transition between the 19th and 20th centuries – his Violin Concerto dates from 1896 and following its premiere by Czech virtuoso Tivadar Nachéz, appears to have disappeared virtually without trace.

If neither work has an overwhelmingly strong creative profile – the main influences are, almost inevitably for the time and place, Schumann, Brahms and (to a lesser extent) Mendelssohn – their combined expertise and felicitousness could hardly wish for more persuasive advocacy than they receive here, nor a more truthfully balanced recording. Philippe Graffin’s tonal sweetness, beguiling expressive intensity and mellifluous technique combine to make each phrase ring out with the sunshine freshness of new discovery. His ability to hone in on and exalt in the music’s lyrical nexus points is remarkable, and the BBC National Orchestra of Wales under the expert and unfailingly sensitive guidance of David Lloyd-Jones provides expert backing.