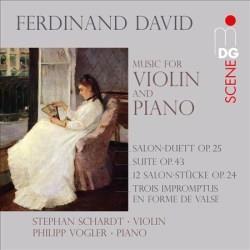 Stephan Schardt here unearths an attractive selection of Ferdinand David’s rich, yet sorely neglected legacy of violin compositions. Although he claims a willingness to introduce the subtle slides and rhythmic modifications that animated David’s own performances, he fails to recapture effectively either the hallmarks of David’s playing style or the sensibility of the era.

Schardt tackles David’s Bachian unaccompanied Suite with a gusto that results in some roughness in the Menuett and Gigue and a breathless, though witty Gavotte. Elsewhere his playing faithfully retells the story behind David’s Salon–Duett variations, despite a rather lumpy piano contribution from Philipp Vogler. However, this colourful piece and the other salon miniatures require a more indulgent and disarmingly easy interpretative approach and absolute technical command if they are fully to convince. Some questionable double-stopping in the lyrical Ballade, snatched chords at the end of the virtuoso Rondo (and in the third Impromptu), an ill-considered express tempo for the Prelude and a lack of final polish in the Lied spoil some otherwise characterful accounts, from which the jovial Scherzo, nostalgic Romanze, Bachian Canon, restless Capriccio and the first Impromptu stand out. The recording is slightly dry with the piano more forward in the balance than the violin.