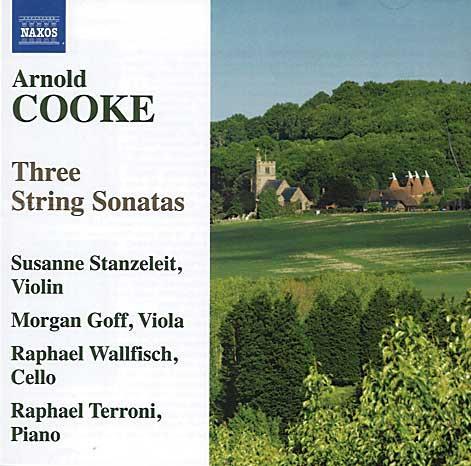 Yorkshire-born Arnold Cooke (1906–2005) studied for three years in Berlin with Paul Hindemith and wrote six symphonies as well as 45 chamber music works (including, like his teacher, sonatas for an array of instruments). This well-recorded disc, previously released by the British Music Society, features the world-premiere recordings of three of his string sonatas. Cooke’s grasp of rhythm and his knack for easy lyricism lead to an attractive if relatively un-probing style that is idiomatically written for the instruments.

Susanne Stanzeleit is an ideal advocate for the Violin Sonata no.2 (1951). She is perhaps the most convincing player on the disc, producing a punchy, urbane first movement and natural characterisation of themes, and adding real depth in the intimate, searching second movement. In the Viola Sonata, written 15 years earlier, Morgan Goff, too, is also a  persuasive performer, if occasionally there could be a touch more power and warmth to the sound. The Cello Sonata no.2 (1980) is the only four-movement work here, adding a brief scherzo, which Raphael Wallfisch plays with panache. The second-movement Lento has a touch of spare, late-Shostakovich bleakness that he handles affectingly. Throughout, pianist Raphael Terroni, who died in 2012, is lucid and committed.