Classical musicians should think more like a rock band

Break of Reality, a band of three classically-trained cellists and a percussionist, have forged a successful career by adopting the mindset and values of rock musicians, says co-founder Ivan Trevino 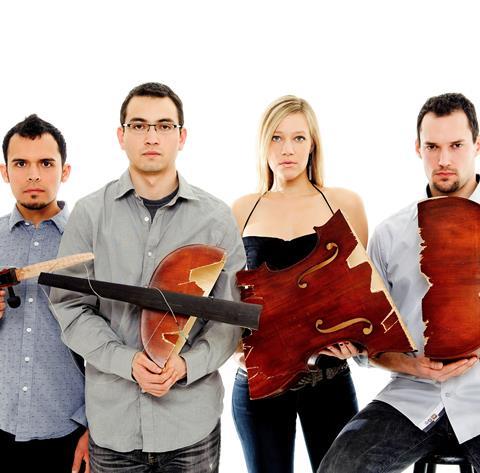 As a founding member of Break of Reality, I've learned a tremendous amount about being in and running an alt-classical chamber ensemble. Break of Reality has provided many great experiences for me, like going on a bus tour, opening up for bands like Cake, and playing music festivals like SXSW in Austin, TX. This is year ten for Break of Reality, and we are fortunate to make a career touring, selling albums, licensing our music, and streaming our music across the internet.

During my travels with Break of Reality, there is one question that young musicians always ask: ‘How do you run a successful chamber ensemble?’

Classical musicians are contemplative beings. We think, over think, and think some more. My former teacher used to warn me of this. ‘You’re suffering from over-analysis paralysis,’ he would say. He was right. ‘How should I phrase this? Where is this musical line going? What was the composer thinking?’ I would spend so much time thinking about these questions and so much time figuring out the perfect way to play something; I was thinking rather than actually doing.

Meanwhile in the rock world… Musicians are asking fewer questions. Searching for less perfection. Wrong is accepted. Rawness is celebrated. There is a ‘no fear’ mentality. Anything goes, and I love that.

Break of Reality has taken the ‘rock’ approach to many aspects of our band and business. Even though our instrumentation is three cellos and percussion, we call ourselves a ‘band’ and not an ‘ensemble’. Rather than commissioning composers to write music for us, we write our own music, which gives us a unique voice and builds a personal relationship with our fans. And yes, we use the word ‘fans’ instead of ‘listeners’. We want to develop lifelong supporters of our band. That is the key to running a rock band, and I'd say it’s the key to running a chamber ensemble as well.

Also, we are a for-profit corporation as opposed to the traditional non-profit, and as such, we have no board of directors. We call the shots in every component of our business, and since there are fewer people involved in our business, things happen at a much faster rate. For example, when we covered the theme from Game of Thrones, there was no one saying, ‘I'm not sure this fits into your long-term, ten-year plan. Let's have a meeting to discuss this.’ The idea was presented on a whim on a Monday, and on Tuesday, we had a video shoot to record the tune. And thank goodness for that whim, because that video has had over 3.5 million views on YouTube and has introduced our band to a global audience.

Given our corporate status, we don't apply for grants, which is actually a good thing. We don't want a business dependent on other people's money. We want to be able to fund our own business through concert fees, album sales, and other streams of profit-based income, all centred around our fan-base.

If we do need extra income for a special project, we'll call on our fans for help. For example, we recently raised $50,000 through Kickstarter to do a public school music education tour around the US. We were able to work with thousands of music students and raise money for their music programmes too. It was an amazing experience for everyone.

Sure, we could have partnered with a fiscal sponsor to search out grants to potentially fund the project, but there's no fan interaction with that model. We like the fact that we can engage and rally our fans behind a particular project and in exchange give them incentives like signed albums, and original tunes composed just for them. It builds a connection with them, and again, we consider this the most important factor in our band’s success.

So, how does one get ‘fans’ anyway? By playing. A lot.

Since Break of Reality travels between both the classical and rock worlds, I've noticed a recurring observation: Rock musicians play out much more than classical musicians do. They play more gigs. Way more gigs.

Just look at most local rock bands. They have show after show lined up. Every weekend, they are playing in a new bar or club. They’ve got their albums for sale, their email list out, and they are slowly but surely growing their fan-base. Meanwhile, classical musicians who have been playing their instruments for decades, who have invested hundreds of thousands of dollars in their musical training, don’t have this same mindset. Too often in the classical world, musicians have no gigs lined up, with no albums and no website. How does this make any sense?

The music school landscape really doesn’t help our mentality either. In an entire year, a music student might play ONE recital, and maybe a few ensemble concerts a year. No wonder classical musicians don’t play out enough. The culture doesn’t demand for it. Doesn’t prioritise it. And it should, especially given the decreasing number of orchestral job opportunities in the US.

Break of Reality wouldn't be where it is today if not for our dedication to playing live, especially during the early years. We've played hundreds of concerts together, and through those concerts, we've slowly but surely built a fan-base that can now sustain us.

‘You don’t know until you ask.’ I love that saying. And it is so true, especially in music. Rock musicians understand it. Classical musicians sometimes don’t. A student in my music business class at Eastman once asked me how to go about booking a gig. The student asked question after question about the proper semantics to use when speaking with a presenter, how often to contact someone, etc.

Meanwhile, rock musicians skip the contemplation. They just walk into a venue, speak with whoever is in charge, and make something happen. That’s all it takes. Worse case, the venue says ‘no’. And that is part of the business. Rock musicians understand rejection and don’t fear it.

Most classical musicians don’t have that mindset. Again, it’s not instilled in us. We’re contemplators. We sit on things for a long time before we take action. We’ll practise the same piece for a year before performing it. We’ll study the same 100-year-old curriculum without question.

We classical musicians are also fearful. We fear playing things the wrong way, and fear what our peers, teachers, and audiences will think of us. It’s probably why many of us don’t improvise. We believe, because it’s how we were taught, that there’s a perfect way to do things, and we can’t settle for less.

Well, the music business is not perfect. There’s no right way to do anything. Sure, there are some givens (having a website and email list is a good start!), but in our business, anything goes. For example, Break of Reality met its former manager of three years while busking on the streets in Central Park. That’s right. Playing for free on the streets. He dropped his business card in our tip jar, and we called him that night. We met our current agent by sending an unsolicited email. None of these things happened by the book. Nothing does in the rock music business. Things happen to those who are persistent, and maybe with a little bit of luck. In order to find that luck, you have to stick your neck out and make something happen.

Break of Reality is currently on a US tour of festivals, clubs and high schools to support its new album, TEN, which was released in March. www.facebook.com