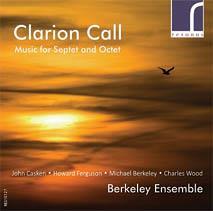 Launched in 2011 the artist-led, download-only Resonus label has notched up close to 30 releases. If this disc is anything to go by – a well-chosen British programme of mixed string and wind works, with convincing performances by the Berkeley Ensemble (a finalist in the 2009 Royal Over-Seas League competition), it could well be one to watch.

The fertile Romanticism of Howard Ferguson’s Octet (1933) offers the players a richer textural palette, which they fully explore in the turbulent first movement and in the broadly lyrical but slightly uneasy slow movement, which also allows individual members to shine. The Berkeley Ensemble lends the finale an urgent, martial edge.
Back to the present again, with John Casken’s bassoon-led narrative Blue Medusa. This time in septet guise, the Ensemble excels as an instinctive collective, a feature that is key to realising the work’s coherence and its unfolding as a perfect ballet without dancers.

Charles Wood’s 1889 Septet inhabits an inescapably Brahmsian idiom but, as with Ferguson’s piece, it is beautifully constructed. Again the ensemble gels cohesively, and the well-balanced recording shows the players in their best light.