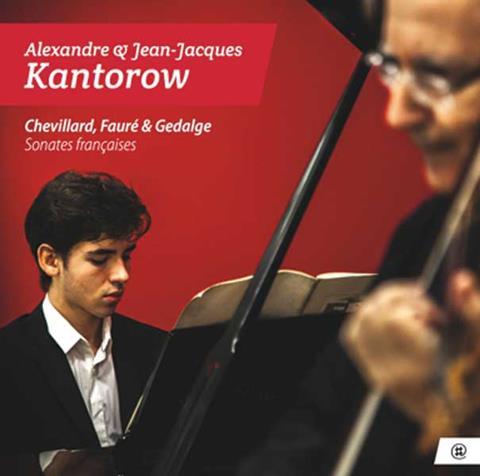 There is a radiance in the quality of sound and performance of three late 19th-century French sonatas from the recently formed Kantorow duo, the gifted 18-year-old son joining his famous violinist father. The works come from that heavily perfumed era that held sway in Paris salons, the frequently recorded Fauré gaining much from the warmth generated by the liberally applied vibrato of Jean-Jacques. If his creamy quality tempers the passion in the opening movement, the following Andante is perfectly shaped and the scherzo full of spiky fun. Add the supple phrasing and shading of the finale and this becomes a safe recommendation, to which is attached two rarely performed works.

It may well be owing to the balance given by the sound engineers but the piano dominates in the highly active passages of the first two movements of the Sonata by Camille Chevillard (1859–1923), the nimble fingers of Jean-Jacques coming to the fore and exciting in the brilliant final Polonaise. Musically the Sonata by André Gedalge (1856–1926) – the composer who helped Fauré reshape the Paris Conservatoire – is in the same style, Alexandre greatly enjoying himself in the outgoing piano role, with the violin part often doing little more than decorating.

Even with the caveat on the balance between instruments, the recording is of a very pleasing quality.