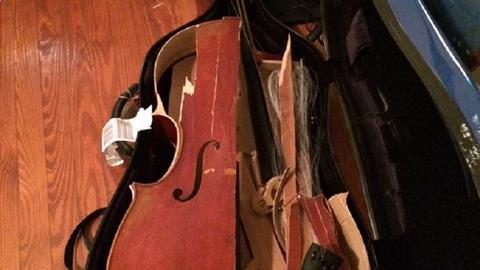 A Florida State University graduate student in cello performance has set up a Go Fund Me page to replace her instrument, which was smashed to pieces on a recent United Airlines flight, she claims.

Carrie Miller earned the money to buy her original cello through teaching, but does not currently have the means to purchase a replacement for her graduate recital in April - she has thus far raised $7,610 of her $10,000 goal.

'Whenever I fly, I always gate check my cello to ensure that it is properly handled. When I flew back to Tallahassee, United Airlines did not allow me to gate check my cello. I pleaded with them saying that I have checked the cello many times in the past and was allowed to do so on my initial flight to California. They were completely unsympathetic refusing to allow me to be present during the checking process. There were no extra seats on the plane so I could not buy a seat for my cello. I couldn’t cancel my flight and was forced to check it through normal baggage procedures.

When I got back to Tallahassee, my instrument was completely broken. Not just parts of it. The whole instrument was in pieces as well as the case. Clearly the airline completely mishandled my cello. This incident has been incredibly traumatic. I’m currently using a loaned instrument that is inferior to my cello. This instrument negatively impacts my ability to perform at a high level causing my work at school to suffer and jeopardizing my livelihood.'

In June last year a musician was ‘kicked off’ a United Airlines flight for attempting to stow her violin safely.