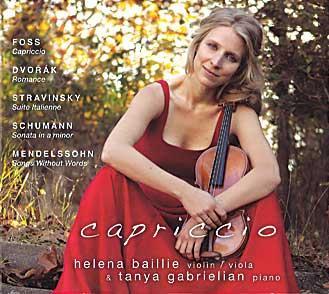 That controversial critic Hans Keller once proclaimed viola playing a ‘phoney profession’, his point being that any violinist would be able to do it after a few hours’ practice. Should anyone care to revive his theory today, the present CD would be an argument in its favour: Helena Baillie alternates between the instruments – a 2012 violin by Collin Gallahue ‘in association with the workshop of Samuel Zygmuntowicz’ and a 2009 viola by Zygmuntowicz himself – sounding perfectly at home in both.

Foss’s Capriccio (a cello piece written for Piatigorsky) is a rousingly tuneful piece of mid-20th-century Americana that sounds very good on the viola. Stravinsky’s Suite italienne is played in Paul Silverthorne’s reworking for viola of Samuel Dushkin’s violin version, and it works beautifully, Baillie getting its barbed wit just right. Mendelssohn’s two encores are also presented in violin arrangements – by Friedrich Hermann and Fritz Kreisler – but played one on each instrument, the viola version needing no adaptation (I would have preferred Lionel Tertis’s arrangement of op.19 no.1, with its idiosyncratic double-stopping).

Back on the violin, Baillie gives distinctly lyrical readings of Dvorák's Romance and Schumann’s First Sonata in close collaboration with pianist Tanya Gabrielian. Schumann’s ‘with passionate expression’ could have summoned a more fiery response, but theirs is a valid alternative. The recording quality is agreeably lifelike, and the CD leaves the music to speak for itself (which is another way of saying that there are no booklet notes of any kind whatsoever).