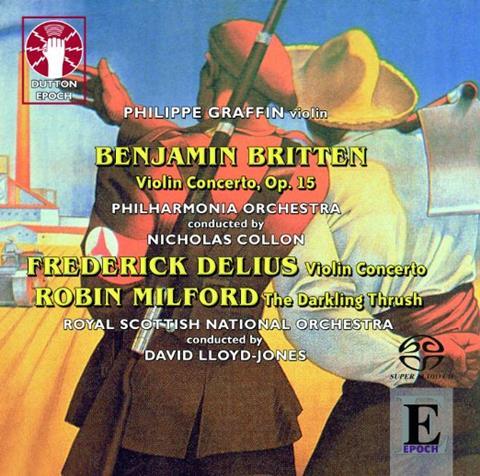 Delius’s and Britten’s violin concertos require quite different resources from their soloists, which may be why I felt that Tasmin Little succeeded better in the former than in the latter in her recent Chandos recordings (reviewed in December 2011 and August 2013 respectively). Philippe Graffin’s qualities, I sense, lie the other way round. In the Delius, which is almost entirely lyrical through its 25-minute span, his expressive bulges and occasional untidiness of articulation become a little wearing. There’s passion in his playing, matched by that of the Royal Scottish National Orchestra under David Lloyd-Jones, but also a febrile fragility that doesn’t quite fit.

In the gutsier, more rhythmically varied milieu of the Britten, however, Graffin sounds much more at home: his line is firmer and his expressive range better exploited. As well as steering a resolute course through the fiendish Vivace, he also finds the darkness, dread and compassion that lie behind the concluding Passacaglia. The Philharmonia under Nicholas Collon equals him in every way.

The novel filler here is the premiere recording of The Darkling Thrush of 1928 by Robin Milford, a kind of sequel to Vaughan Williams’s Lark and inspired by Hardy’s poem of the same name. It’s attractive if a little too Lark-like in its violin line, which Graffin nonetheless weaves and winds through eloquently. Sound is first-rate throughout.