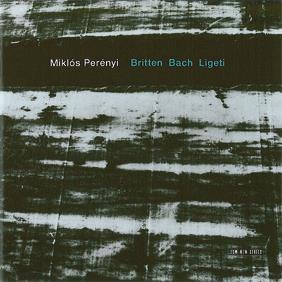 Miklós Perényi delivers stunningly accurate accounts of all three solo works in this clear recording, surmounting numerous technical hurdles – and they come thick and fast – with enviable elan. The Prelude of Bach’s Sixth Suite is, for example, a virtual thumb-position etude, quite apart from the need to inflect the music. Perényi presents a clearly shaped and directed account, followed by judicious if sometimes understated characterisation of the dance movements. The incredibly awkward Gavotte lacks a little charm, however, and the Allemande could offer more expressive articulation, though Perényi scores on absolutely meticulous rhythmic subdivisions.

This is a characteristic that is particularly impressive in the more complex rhythms of the Britten. Again the text is scrupulously observed, and yet it is the interpretation beyond the text where Perényi could be more dramatically overt, as some bolder gestures would certainly enhance the expression.

Perényi gives a masterfully fluent account of Ligeti’s Sonata, which is particularly persuasive in the opening movement, where he draws a strong linear thread and generates much atmosphere. The ensuing Presto is delivered with impressive virtuosity, but taken at a speed that eclipses some of the musical intensity – a slightly steadier tempo would lose nothing in its moto perpetuo impact, but gain in the chance to highlight the subtle intervallic oscillations.