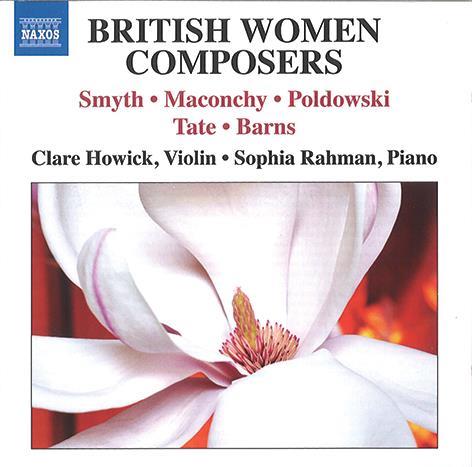 Ethel Smyth’s 1887 violin sonata was rejected by everyone after its Leipzig premiere, including Joachim. Clare Howick and Sophia Rahman, performing with enormous skill and commitment, show it to be an expressive and wide-ranging piece with moments of great beauty. Unfortunately there aren’t enough of them to sustain its half-hour length. A first movement of high seriousness but little memorable material is followed by a short, eccentric scherzo. The Romanze: Andante grazioso is nicely played, fluent and dolefully eloquent, and the playful finale is vivacious, if rather earthbound – mostly the fault of the forward, bottom-heavy recording.

After the Smyth, Elizabeth Maconchy’s Three Preludes of 1970, dissonant and concentrated, come as something of a shock. Howick’s controlled ferocity in the outer preludes is almost unnerving; she and Rahman are cool and expressive in the central Andante Quieto. These are powerful, compelling pieces, superbly played.

The Polish-born Irene Wieniawska, who published under the pseudonym Poldowski, took British nationality when she married Sir Aubrey Dean Paul. Her sonata, written early in the 20th century, is a rich and rewarding work, full of colour and detail, splendidly caught by Howick and Rahman. They bring a similarly vivid palette to Phyllis Tate’s 1954 Triptych, engaging and quixotic, before ending as they began with an Ethel – Barns this time – dispatching her virtuoso 1928 bon-bon La chasse with extrovert good humour.