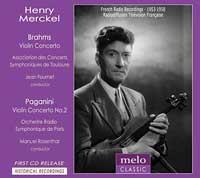 Born in 1897, Henry Merckel belongs chronologically and stylistically between Jacques Thibaud and Zino Francescatti, and although he is much less well-known, his few recordings of a fascinatingly eclectic repertoire mark him out as a great violinist. In his later years he still played with beautiful intonation and fluency, incisive bowing and rhythm, always purposeful and nuanced phrasing. His wiry yet sensuous sound and forthright but poetic musical approach have a distinctly Gallic flavour that naturally imbues his superlative recordings of Saint-Saëns, Lalo, Pierné and Fauré. A wonderful version of Hindemith’s Concerto (Dutton) and now this tremendous live Brahms Concerto from December 1953 prove he was equally impressive in German repertoire. Merckel ignites the dramatic, heroic dimensions with trenchant intensity – the finale is thrilling – and his lyrical flights in the upper register are sublime. The Adagio’s blend of ardour and chamber sensitivity is especially memorable – note the violin’s seraphic octaves when the theme returns in the winds. As an encore to the Brahms, Bach’s Gavotte is crisply etched.

By the time of the Paganini performance (December 1958), Merckel’s sound had developed a pungent edge which may not appeal. But his pyrotechnics are outstanding and his expressive cantilena, balance of drama, clarity of line and perfectly judged florid runs are in exemplary bel canto style. The Campanella finale whirls with irrepressible energy. The orchestral support is rousing if not polished, the recording quality isn’t pristine and the editing between movements might have been tidier, but none of this detracts from these special performances.