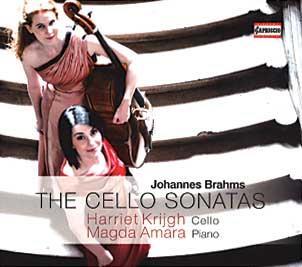 Recording three solo CDs before you are 23 is no mean achievement, but then Harriet Krijgh, with a whole string of competition triumphs behind her, looks set to become something extraordinary. Having already committed French sonatas and Haydn concertos to disc, the engaging Dutch cellist, who studied in Vienna with Lilia Schulz-Bayrova and Jontscho Bayrov from the age of 13, now turns to Brahms in interpretations that grow on you the more you hear them. For the opening of the E minor Sonata, Krijgh eschews a rich, full C-string tone for a more hollow, questioning timbre, and a distant, muted second theme. However by the time she reaches the fiery cross-string passage she produces a remarkably expansive, full-bodied sound from the 1698 ‘Magg’ Stradivari, formerly used by du Pré. The concert hall acoustic, and the realism of the very three-dimensional recording, take some getting used to, but the range of sounds she draws from this instrument, the bitingly aggressive staccatos and passionate portamentos, are ideal for the turbulent contrasts of Brahms’s writing. The F major Sonata gives Krijgh even more rein for her deeply lyrical playing, with cello and piano rising and falling naturally with the swell of the music and poignantly expressive vibrato in the Adagio affettuoso.