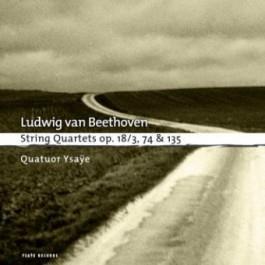 Although numbered 3 when first published as part of the six op.18 quartets, the D major was in fact the first to be composed, which gives this programme a special significance as it brings together three distinct forms of Classicism. If no.3 is a vital extension of the Haydn–Mozart Classical tradition, the so-called ‘Harp’ is a post-Classical masterpiece, which attempts to rein in the experimental expansiveness of the ‘Razumovsky’ Quartets. The final quartet (op.135) is a unique neo-Classical distillation of Beethoven’s creative aesthetic of the 1820s.

The Ysaÿe (recorded live) stands apart from the interpretative mainstream in adopting an overtly cantabile style in Beethoven. Accents are gently cushioned and the resin-on-string articulation familiar (in their very different ways) from, say, the Budapest and Amadeus quartets is dissolved into a velvety legato that magically sustains the music’s long-range trajectory. Some may find the spick-and-span thematic sparkle of op.18 no.3 a shade underplayed, but the upside is a gentle warmth and charm that the furrowed-brow school of playing rarely permits.

The Ysaÿe’s essentially lyrical approach fits hand-in-glove with the exultant phrases of the ‘Harp’ Quartet, but the greatest revelations are to be found in op.135, which exchanges the suffocating compression of traditional readings for a life-enhancing radiance. Fine sound, too, that is both well balanced and tonally neutral.