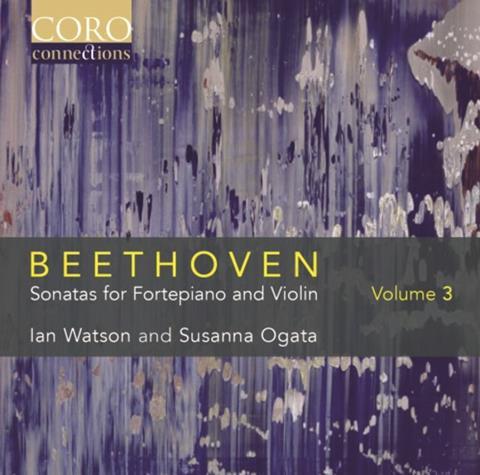 In this, the third and penultimate, volume of their Beethoven cycle Ian Watson and Susanna Ogata perform the op.30 trilogy with clarity, imagination and unanimity of purpose. They find an ideal balance between tender lyricism, dramatic intensity and energetic joie de vivre, and instil their readings with deft timing and thoughtful phrasing. Tempos are generally well judged, although the bustling finale of no.3 seems occasionally lacking in stability.  Ogata’s contribution is the more controlled. Apart from some occasional sour tuning, she plays with a fluent authority, forging some memorable moments – particularly in the affective slow movements. Watson’s fortepiano (an Anton Walter replica) comes across powerfully, often enhancing the impact of these dramatic, sometimes explosive, accounts, whose rhythmic drive is particularly striking in the buoyant outer movements of nos.2 and 3. On the downside, Watson’s dynamic range is narrow compared with the broad spectrum of Beethoven’s prescriptions; in particular, some of the composer’s softer dynamics are not readily distinguishable. The pianissimo in the gentle slow movement of no.1, for example, is much too present and the passage before the sixth variation in that sonata’s finale barely reaches piano, let alone pianississimo. Issues of balance and differentiation apart, the recording is warm, spacious and crystal clear. ROBIN STOWELL