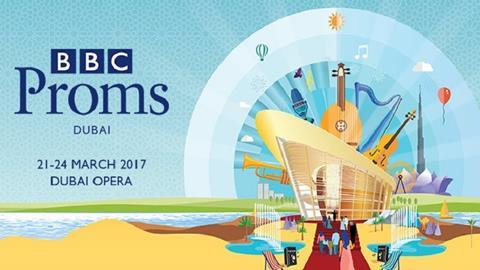 The BBC Proms is to hold a four-day festival in Dubai in 2017. Taking place from 21-24 March at Dubai Opera, the tour will mark only the second time the British summer event has travelled abroad, following the inaugural BBC Proms Australia in 2016.

Part of the UK/UAE 2017 Year of Cultural Collaboration, the Dubai festival will showcase the talents of the BBC Symphony Orchestra and BBC Singers and feature core classical repertoire, British music and new music, alongside orchestral and chamber workshops, masterclasses and open rehearsals.

Mohammed Fairouz’s music will feature alongside world premieres of works by Dubai-based British composer Joanna Marsh and Australian-Egyptian composer Joseph Tawadros.  The series of six concerts will culminate in the traditional Last Night of the Proms, conducted by Edward Gardner .

Nearly 600 'Promming' (standing) tickets will be made available each day for each concert, priced from 50 dirhams (£10), and performances will be recorded for broadcast on BBC Radio 3.