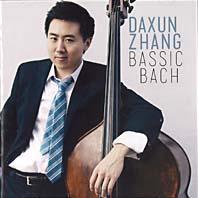 Bach’s six solo suites stand at the summit of combined interpretative and technical virtuosity for the cello. Imagine, then, the myriad challenges involved in attempting to play these glorious scores at pitch on the double bass. Yet such is DaXun Zhang’s all-encompassing command that any concerns seem to melt away. He produces a seductively warm sound, entirely free of thinning in the upper reaches and bloating, lower-register resonance. His intonation is also for the most part remarkably pure, his position-changing virtually inaudible, his use of portamento undistracting and employed sparingly, and most strikingly, every note sustains a clearly articulated tonal core without any ‘noises off’. Indeed, it would be difficult to imagine these notoriously exacting works being executed on the bass with greater sonic purity.

The icing on the cake is provided by the exceptional quality of Zhang’s musical insights, caught sensitively by the engineers in an engagingly neutral acoustic. So supple is his bow control – he colours and weights each phrase with unfailing precision – that one is left entirely unaware of the prodigious distances and intricacies being negotiated by his left hand. A remarkable achievement that will I suspect redefine for many the bass’s capabilities in this music.