Ball: Cello Concerto no.1*, Song Without Words† , Roundelay† , Close of the Day† , Folksong Arrangements† , For Stjepan 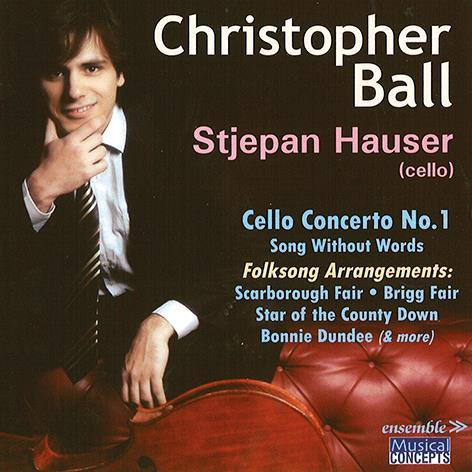 The Croatian cellist Stjepan Hauser has become something of a celebrity, appearing as one half of the duo 2Cellos on a smash-hit YouTube video – and on the cover of the January 2012 issue of The Strad. This recording from 2010 pre-dates such heady stardom. As the composer Christopher Ball says in his booklet notes, all the music on the CD is dedicated to Hauser ‘in admiration for his uniquely expressive talent’. He also explains that he aims to write attractive, tuneful music (and sometimes gets told off for it). The Cello Concerto certainly ticks both boxes, although its whiffs of Vaughan Williams and Holst in folk-inspired mode seem disconcertingly time-shifted, given that this is a live recording of the premiere.

Hauser is indeed an expressive player who gives the work a genial, persuasive performance, with flowing, beautifully shaped lines and a winning blend of strength and intimacy. The three short works that follow, Song Without Words, Roundelay and Close of the Day, are effective character pieces, played with some depth of feeling and subtle colouration, as are the folk song arrangements that ensue. The final unaccompanied work, For Stjepan, has a sustained, supple lyrical flow. The recorded sound is warm, with both cello and orchestra close in; the piano has a touch of echo.