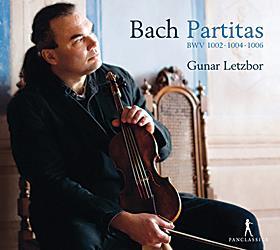 ‘Bach in private’, promises Gunar Letzbor’s apologium for a recording so close, dry and frankly airless that you feel you might be standing a metre or two away from him. The physical effort behind his playing, too, is palpable, as Letzbor bravely allows every little imperfection to be shown up along with his sighs and groans: as he says, a recording isn’t a concert, where allowances would more naturally be made for a rogue string touched in passing or a lost note that is quickly forgotten.

At home, you’re stuck for ever with the stretched note at the apex of each phrase in the B minor Partita’s Double and the cussedly plain double-stopping of its Sarabande. The great bookends of the D minor Partita are approached as doorstop novels in their own right, as Letzbor breathes and mulls over

a turn of phrase like an Ibsen character where the Strindbergian drive of a violinist such as Christoph Poppen cuts to the quick; but Letzbor’s recreative zeal harries the gigues into submission and he fairly tears into the E major’s Preludio, creating the unusual if anachronistic effect of guitar feedback (which I last encountered with Nigel Kennedy’s appropriations of Hendrix).

This is warts-and-all Bach, and anyone attracted by the idea should also investigate Letzbor’s previous disc of the Sonatas. Others should approach with caution.