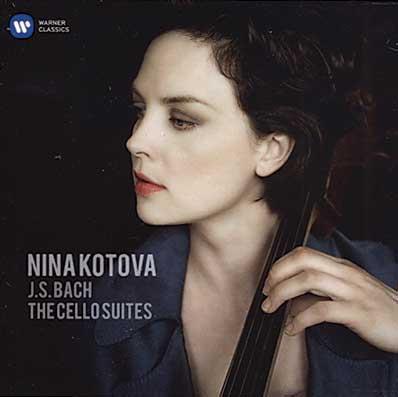 Baroque music has not hitherto loomed large in the career of Nina Kotova, and while there is much to enjoy here, a few more years’ immersion would have resulted in a much riper and more polished offering. The Bach Suites are presented consecutively, with some surprisingly long pauses between movements. Kotova takes the quick dance movements at breakneck speed, but at this pace her semiquavers often fall over themselves in her tendency to rush and even where the pulse remains constant, some of the detail gets lost.

Kotova plays on the 1679 ‘du Pré’ Stradivari. This glorious instrument really comes into its own in the high tessitura of Suite no.6, when it rings out in all its lovely brightness in this generous, full-toned recording. The Sarabande marks the high point of this suite, with Kotova in total control of its high double-stops and the descending pairs of notes sighing with touching nostalgia. Suite no.5 is the best of the set, its Allemande veiled and haughty, its Courante maintaining a sense of elegant flow, with stylish spread chords. The first movement’s fugue is crisp, with nice tight trills, although the decision to end it in the major is a dubious one.

A Bach suite cycle is such a personal statement that it would have been good to read something of Kotova’s take on the works in the booklet. There is no denying the passion behind these interpretations, but explanations of some of their anomalies – the curious tying of all the repeated notes in no.1’s Gigue, for instance – would have been welcome.