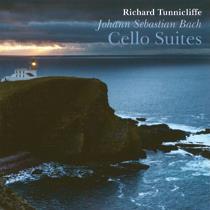 British cellist Richard Tunnicliffe is just as likely to be found behind a viol, as a member of viol consort Fretwork. But as a teacher of Baroque and Classical cello, and principal cellist in the Avison Ensemble, his cello-playing credentials are considerable, and these mature and convincing performances are obviously the fruit of many years of performance.

The contemporaneity of the cellos in this recording takes some beating: a German Leonhard Maussiell of c.1720, exactly the time Bach is thought to have written the suites, for nos.1–5, and a piccolo cello of 1726 by Pierre Malahar for the Sixth Suite. Both instruments are resonant and closely recorded. The C minor Fifth Suite seems to bring forth more audible inward breaths than the others, and the tinny timbre of the piccolo cello’s E string takes some getting used to, but overall the sound is just the right side of realism.

These are weighty interpretations with a broad harmonic sweep. One is very aware of the chord progressions, with the pedal notes readily calling to mind Bach’s organ music. Decorations of a dance on its repeat are carefully chosen but few and far between, as is dynamic variation. The power and control of Tunnicliffe’s right arm are most noticeable, resulting in wonderfully legato bow changes. Rubato is always kept with the wider pulse and the dances have strong individual characters – the Courantes run, the Gavottes are light on their feet, and there’s a spring in the step of the Gigues.