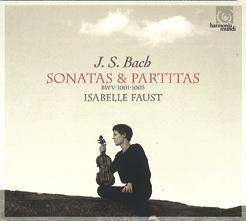 Anyone who owns the first volume of Isabelle Faust’s unaccompanied Bach (reviewed in June 2010) has probably ordered this CD already. Faust herself, writing in the booklet, sums up the qualities of both when she defines the interpreter’s goal: ‘Bachian perfection, complexity and energy combined in absolute balance.’ True, perfection may be unobtainable, but this will do for now. In the opening Adagio of the G minor Sonata, Faust sets out her stall, with playing of dramatic shape and firm musical direction below its contemplative, free-flowing surface, performed with crystal clarity and precision. The fugues of the G minor and A minor sonatas have lightness and lyrical shape, with wonderful weighting between the parts. The A minor Fugue has its powerful moments, particularly towards the close, but along the way much if it has a sense of being caressed, no matter how many parts are being played at once. The multiple-stoppings everywhere have a light touch, whether broken or simultaneous – there are no mighty scrunches here.

This is, among many other things, a catalogue of bowing style, a key element of the balance and contrast that mark all three works. There is, for instance, a bite to the B minor Courante, while its Double is a sparkling spiccato perpetuum mobile. The recording is clear and warm.