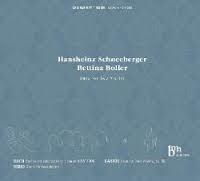 Idiosyncratic doesn’t even come close. There are so many downright bizarre things about this new CD/Blu-ray package from Swiss violinists Hansheinz Schneeberger and Bettina Boller that it’s hard to know where to begin.

For a start, the audio comes in at barely more than half an hour, although that bafflingly short duration is admittedly supplemented on the Blu-ray by a half-hour interview with Schneeberger (in German, with no subtitles). While we’re on the video, the single-camera, static filming of Schneeberger and Boller in live performance, inelegantly edited (as is the echoingly resonant audio) and with repertoire information scrolling across their heads, looks disconcertingly amateurish – even if the images add a compelling directness to the duo’s performances.

For on the strength of the audio disc alone, those performances often come across as wilfully abstruse. There are sudden flashes of brilliance and searing insight, but the players’ accounts too often seem to ignore the obvious – in allowing the accompaniment to drown out the melody in Bartók’s ‘Walachian Dance’, for example, or in pulling the propulsive rhythms around (independently of each other) in the stomping ‘Pillow Dance’. Indeed, rhythm and tempo are rather approximate elsewhere, too, and intonation sometimes sour.

The opening Bach ‘Preludio’ is more of a re-composition than an arrangement, adding canonic voices, chorale-like chords and even Boller’s singing voice to the original – pleasant enough, but performed with a strangely shrill tone throughout. There’s no denying the vividness and spirit of the two violinists’ highly characterful performances, but it’s often at the expense of detail. With so many unexplained peculiarities, the whole project feels a bit of an enigma.