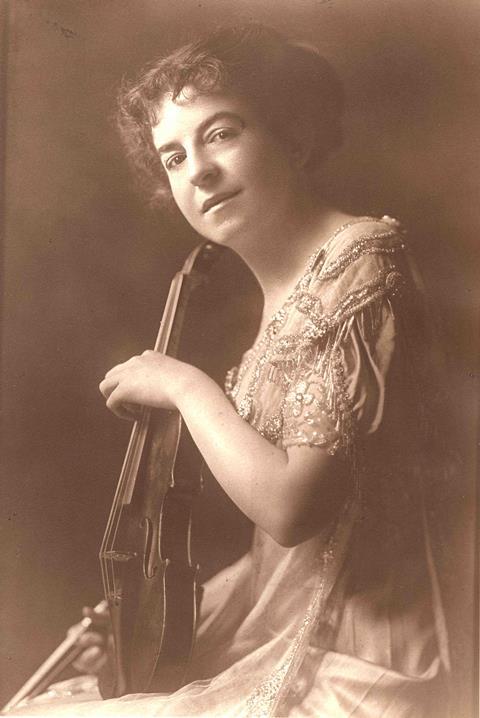 The great American violinist Maud Powell (1867–1920) will be awarded a posthumous lifetime achievement award by the Recording Academy at a ceremony the night before the 56th Grammys in January.

Powell is credited with being a groundbreaking pioneer, whose consummate skill and communicative abilities impressed aficionados and the general public alike.

A tribute marking the 120th anniversary of Maud Powell’s birth was published in The Strad, November 1987, in which she is described as ‘America’s first great master of the violin who was internationally recognised as a violinist of the first rank,’ and ‘one of the most significant pioneers of classical music in America.’

Following her US debut, New York critic Henry Krehbiel was moved to write: ‘She is a marvellously gifted woman, one who in every feature of her playing discloses the instincts and gifts of a born artist. [Powell] radiated a sense of energy, genius, vitalized by character.’

‘Although Powell assimilated the best of each European tradition in which she was trained, she forged her own original approach and never lost the American freshness, vigour and originality which distinguished her playing,’ the article continues.

Louis Kaufman is quoted in the feature describing his impressions on first hearing Maud Powell perform: ‘I still have vivid memories of her tall statuesque appearance, … her tone was very bright and clear. I was impressed by her dash and brilliance. There was no trace of a dull, academic approach. I remember her impeccable intonation, an unusual control of the left hand and a supple and powerful bow arm.’

An article about Maud Powell is published in The Strad, July 2011 issue. Subscribe to The Strad or download our digital edition as part of a 30-day free trial.

Photo The Maud Powell Society for Music and Education