8 ways for violinists to improve posture

Advice for violinists from The Strad's pages on establishing a relaxed and stable posture for optimal performance, and avoiding strain and injury 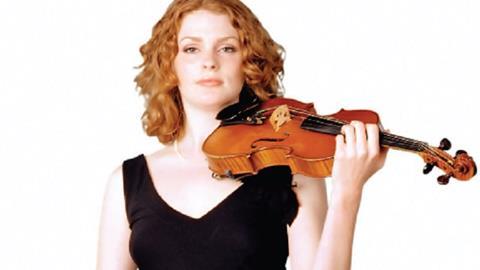 For standing position, a good stance may be achieved by bearing in mind that your body weight rests primarily on your left leg. Remember that the violin rests on your left side and is the reason for the principal weight on that side for balance. Do not spread your legs too far apart. Twelve to fourteen inches is enough to give you proper balance. Keep your knees flexed, do not stiffen, and your right leg must be relaxed. When shifting your weight, your right leg may move forward; always return to the normal position with the right leg and do not start walking. Moving around is not a good habit. Think of Jascha Heifetz whose legs were like a tree trunk. Focus all of your movement on your hands and keep your mind solely focused on the music.

In the fraction of a second before beginning a stroke – whether before attacking the string from the air, or before placing the bow on the string – there must be a moment of complete balance. To begin the opening of the Bruch G minor Concerto, bring the bow to within a couple of centimetres of the string and then stop. Find a feeling of balance – of the bow in the hand, the weight of the bow balanced by the little finger; a feeling of the arm suspended in the air with only the minimum effort to stay there; and a feeling of floating – and then place the bow on the string to begin the G.

It is important to be in good posture whenever possible, so that the different parts of the body are correctly aligned, thus placing minimum stress on body tissues. However, the reality for a musician is that less-than-ideal posture is inevitable. The consequences include the overworking of some tissues and underworking of others, leading to imbalances in flexibility and strength; and the misalignment of joints, which then undergo more wear and tear than they would otherwise.

Damage to muscle fibres and connective tissue – which occurs especially during eccentric muscle contractions, when muscles are both lengthening and contracting at the same time – can result in muscle tears and the formation of scar tissue, which tends to shorten muscle fibres. So stretching at the appropriate time in the healing process is necessary to counter this.

The relationship of the head, neck and back is of central importance to human balance, co-ordination and movement. Frederick Matthias Alexander (1869-1955), after whom the Alexander Technique is named, described this relationship as ‘the primary control’ since it precedes and determines the co-ordination and use of all the other parts of the body. Violinists and violists are faced with particular problems in relation to the primary control, since the head, neck and shoulder all are directly involved in supporting the instrument.

One common problematic habit when holding the violin or viola is the tilting of the head downwards to the left, which causes a sideways curve of the neck and twists the torso downwards and round to the left. This in turn causes a compression of the left side of the rib cage and of the lower back. Too much weight and pressure are put on the left hip and knee, and the pelvis is tilted downwards to the right – a condition known as scoliosis.

The main attention is focused on the violin hold when introducing a new student to the instrument because the position is so unnatural. It is the demanding task – duty even – of the teacher to make this unnatural position seem natural. Pedagogues working with beginners must develop a technique for moulding this basic hold. This manual activity is like the work of a physiotherapist and it is not restricted to the first lessons – it usually lasts several months, until the child feels that the violin is an extension of their body.

The teacher should mould the child’s violin hold with their own right hand. When the child understands that the head is heavy enough to hold the instrument by its own weight without chin pressure, the teacher may put the child’s left hand on the fingerboard, around third or fourth position. Encourage the child to pluck the strings using left-hand pizzicato.

When the violin is on the collar bone, the left shoulder moves slightly under the violin. Your left elbow should move inward and well under the back of the violin. This will put your left-hand fingers in the ideal position for intonation and controlled vibrato. The violin is sometimes held leaning on the fleshy part of the left thumb and at times with chin down for rapid passage work or descending passages from higher positions. There is a constant interplay of these parts and they must always be relaxed. Do not clutch the neck of the violin with your left hand. The thumb must remain free to glide easily.

If you use a shoulder rest, the left end of it should not sit too close to the edge of the shoulder, as this can cause immobility and tension in the left upper arm. Instead, position the rest as close in towards the neck as you can. The shoulder rest should also not be positioned too low (too far down on to the chest), since this can cause the violin to tilt too much, as well as causing the shoulders to pull in and the back to stoop forward. Instead, position the rest higher on the shoulder.

During certain downward shifts and other exceptional notes you may need to hold the instrument more firmly; but as a general rule do not press down hard into the chin rest or clamp the violin between the chin and shoulder. Pressing is a sure way to create tension which will spread from the neck, upper back and shoulders down into the arms. Instead, simply relax the weight of the head into the chin rest. There is no need to press your chin down – the head is heavy enough on its own.