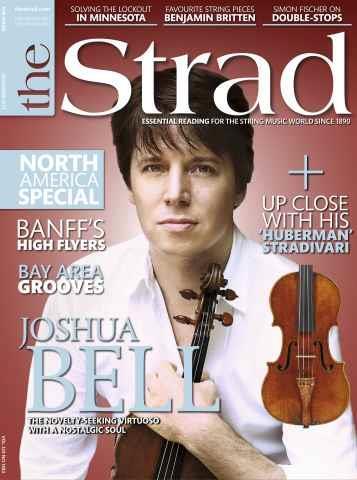 2013: twelve great issues of The Strad; twelve great cover stars. Here are some of the pieces of wisdom and inspiration they shared with us:

1 ‘It's a very artificial situation to be on stage. I grew up with music at weddings and dance houses – a much more living tradition. Maybe I have audience phobia, but my job is to concentrate on the music, on my hands, on the strings and on the other musicians – that's my contract with the audience, that's what they've paid for. I don't think I am so important. ’

2 ‘If I’d listened to all the negative, controlling noise that I heard in my teenage years I would not be where I am now. A young, talented, driven kid has to be given freedom and trust. Of course with a lot of guidance, but many people have absolute ideas about what should happen, and one needs to treat children and teenagers as individuals and let them take their own trajectories.’

3 Whether you’re working with a rock musician, a contemporary composer or the music of Mozart, they’re all expressing similar emotions. They’re using slightly different vocabulary; they’re saying the same thing in different ways. Once you come to terms with that, you don’t feel the barriers between different genres of music.’

4 ‘I find that for most great pieces, there is basically a frame in which they can exist: there is no free way. This is indicated by so many things. You need to be the inspector to solve the mystery – to see what the real picture is. And just saying that is controversial, because people speak of artistic freedom and all that kind of stuff. But from what I see in dynamic markings, metronome markings, phrasings, the time the piece was written and how people played then, it’s quite limited.’

5 ‘A career should never develop faster than one’s inner growth. Aspects like sound and tonal volume need their time. People often want too much too soon, but at 18 you can’t have the sound of a 35-year-old. This isn’t just a question of the hands and musculature: your imagination must develop as well. All too often a young competition winner is taken up by an agency as the “new star”, the publicity machine starts rolling and the musician must run like a hamster in a wheel. Who can mature as an artist under such conditions? My advice to all young musicians is to listen to their instincts and allow themselves to grow. Only then is it possible for something out of the ordinary to happen.’

6 ‘I happen to like people and I put myself in the student’s shoes. I start by asking what they want from me today, which is a good way to begin because it might be something completely different from last time. I like to solve problems, so I look at it as you would if you were talking through an issue with a friend – and often it’s the student who comes up with an ingenious solution.’

7 ‘The only way to get inside the music is by working, working, working. It’s like learning a new language: the best way is to go and live in the appropriate country. Only after years of playing the music of Marais every day did I begin to understand how to approach certain technical passages, or exactly how to realise a written instruction.’

8 ‘I’d just like to see classical musicians up there with the top celebrities. It’s frustrating to see the public lured by the latest pop sensation, who more often than not is completely untalented.’

9 ‘I was never very picky about accepting only talented or extra-talented people. That was never my priority. It was always to discover if I saw a possibility for improvement. Those are the cases that make you feel that what you are doing is rewarding, when you see the progress the student is making because of the advice you’re giving.’

10 ‘Giving classes in many schools around the world, I have found time and again that, even if students take theory and harmony classes, they don’t think to relate what they have learnt there to the work they’re interpreting; nor are they taught to do so.’

Guest-editor Steven Isserlis, October issue, focused on great players of the past

11 ‘When I get to work with someone like Chick Corea or Branford Marsalis, I realise they’re more all-round musicians than most of the classical musicians I work with. Which is ironic, because classical people seem to look down a bit on other styles’

12 ‘As a musician, one can’t exist alone. Someone with the gift of talent must give something back to the community. T