10 views on the benefits of slow practice 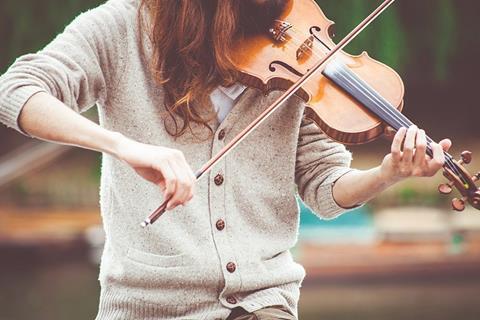 One of the most important considerations is the choice of tempo at which to practise. Teachers with a more or less pronounced streak of sadism have forced students to practise long segments almost exclusively at an extremely slow tempo – the slower, the better. Aside from being extremely tiring such an approach does not bring the desired results. The most appropriate policy is to take a best-fit approach to practising – divide it according to the purpose of the exercise and then assign the most suitable tempo for it. For example, work on intonation, due to the control required, should be attempted in small segments and at a rather slow tempo. Larger segments should be practised at a tempo that ideally allows all the positive attributes of slow and normal tempos – maximum control with right movements. The Russian professor M.M. Beljakov named such a tempo ‘working allegro’.
Rok Klopčič, The Strad, October 2006

Doing slow, analytical practice and studying orchestral scores and piano accompaniments are essential. At the moment I am preparing for a concert at the Royal Festival Hall in London, where I am performing John Tavener’s The Protecting Veil. When I practise, I have to concentrate on a particular kind of long and sustained sound in the highest register of the A string. In order to prepare I practise regular scales and arpeggios with very slow and long bows, always listening to the quality of sound.
Raphael Wallfisch, The Strad, November 2014

Play slowly and practise short sections. If too much happens too fast, the brain cannot notice small differences. Learning needs to happen in manageable chunks, and slowly enough for the brain to notice critical bits of information. The greater the detail that can be noticed, the richer the feedback loop of learning. If we cannot manage the learning process, it is simply because we have bitten off more than we can chew. By working one step at a time, slowly enough, we ensure a successful process of achieving outcomes.
Piet Koornhof, The Strad, September 2002

The most important reason for practising with a metronome is to keep you slow. As string players, we are always engaged in multitasking and if you leave out any of these tasks, the music and technique both suffer. Being able to think of as many tasks as possible is one of the main reasons why it's important to practise slowly. It is a proven fact that the more tasks you are able to perform at the same time, the quicker you will benefit from the process of osmosis. Because we all have the tendency to play too fast, we need an outside influence to keep us slow.
Gary Karr, The Strad, July 2010

Repeat this process until you can play through the passage with no mistakes. After trying this a few times, you will begin to recognise what a Tempo of Consistent Control feels like - it is a calm, centered feeling that is entirely devoid of anxiety. Stay with your Tempo of Consistent Control for at least four days, before moving on to the next comfortable place - you will be surprised how much more secure you feel at the next stop on the metronome now that your foundation is strong.
Shelly Trampoosh, The Strad, October 2011

I play each section slowly, working on intonation, character and building up my tempo. I push myself gradually. Some passages will take longer than others to play at a faster tempo, but I don’t move on the overall speed of any section of the piece until I am ready to play the whole thing at that speed. For me, this makes the learning process much faster; it helps to make sure that there are no sections of the piece that I fear. If I move the whole piece on, then slow down for one difficult section until I can play it properly, I am more likely to dread that section when I have to play it up to speed in performance.
Natalia Lomeiko, The Strad, February 2016 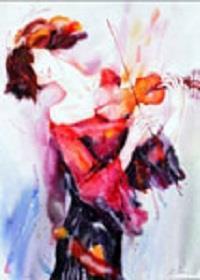 The Violist by Alexander Klevan

On breaking up the piece into short segments I can carefully address particular technical challenges, such as intonation and coordination, without trying to be particularly musical. This might include practising in rhythms, trying different bowings, very slow practice and so on. When I try to go through the piece and bring it up to tempo, I record myself and put tick-marks by the spots that are still not perfect. When I start my next session I go to those particular spots, and when I feel completely secure I erase the ticks. When there are no more ticks I feel pretty good.
Almita Vamos, The Strad, July 2015

At the moment I’m practising the Kodály Solo Sonata for a concert. In some of the perpetual motion sections, the metronome marking is ♩ = 160. I start at ♩ = 120 and run the section through at that tempo before breaking it down. Where there are semiquavers and four beats to the bar, I start by holding the first note for one beat and playing the other notes as written. Then I increase the speed to ♩ = 126 holding the second note of each group, then to ♩ = 132 holding the third, ♩ = 128 holding the fourth, then ♩ = 144 for a group of eight. I gradually work up to ♩ = 160.
Alisa Weilerstein, The Strad, June 2015

Generally for Bach, tempo has to be built up with time. I have a week to practise the Sixth Suite, so I start off playing the Prelude slowly, and only after three days, when my body has had a chance to get used to each position, I start speeding up little by little. By the sixth day I'm finally playing at the correct tempo. That said, there's always a certain degree of freedom in the Bach Suites - I'm more concerned with retaining the dancing mood and the colours of the piece.
Maxim Rysanov, The Strad, January 2014

In difficult passages, I find it helps to tackle a two-minute excerpt by playing it through at a moderate pace. Then evaluate and pick several smaller sections from that same excerpt, and work on them, as slowly as necessary, until you understand what is wrong, why, and what the solutions are. Build up speed, phrasing, dynamics and then try the original excerpt again. You could try pretending you are giving yourself a lesson. What would you tell the ‘student you’ about the passage that isn’t working? More often than not, you’ll have a pretty good idea of where the answer lies.
Yevgeny Kutik, The Strad, December 2015