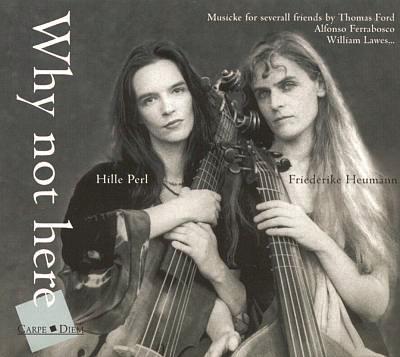 Beautifully recorded, this disc is designed to dispel the melancholy engendered by the folly of modern-day man. And it does. The music is elegantly played, with a surprising variety of timbres. Hille Perl and Friederike Heumann articulate rhythmic figures neatly, and have a refined feel for the shaping of the phrase and the suspense and resolution of the harmonic movement.

A ‘lyra viol’ is more a reference to the style of performance than a particular instrument (viola da gamba), and involves scordatura, chords and plucking – elements that create diversity in the musical fabric. There are three pieces dedicated purely to lutes, by John Danyel (Passymeasures and A Fancy) and Holborne (Goe from my window). Again, this effects a new, more intimate timbre, which is an important factor on a disc with fundamentally only two instruments.

The lion’s share of material is by Thomas Ford. Slower items such as his pavans offer some scrunchy dissonances, while Cate of Bardie (Queens Jig) has a light lilt. I was most struck by Richard Alison’s Goe from my window, which explores some arresting harmonies, and – inevitably, perhaps – William Lawes’s Pavane and Aire. Here the invention is more extended and sophisticated. A delightful album.