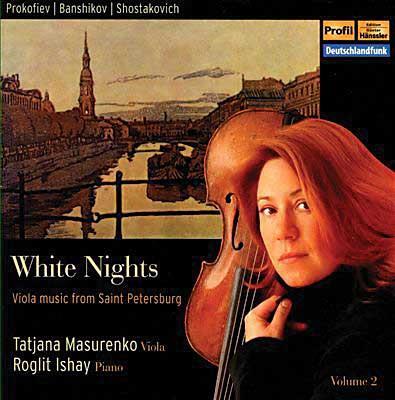 The three pieces on this CD make for a nicely varied programme by the St Petersburg-trained Tatjana Masurenko, viola professor at the Hochschule für Musik und Theater in Leipzig. Vadim Borisovsky’s idiomatic transcriptions of 13 sections from Romeo and Juliet have been recorded in various ways, and here Masurenko has chosen six effectively contrasting movements. For all the exuberant virtuosity she brings to ‘Young Juliet’ and the ‘Dance of the Knights’, it is the intimate, nocturnal shades she conjures for the ‘Balcony Scene’ and ‘Juliet’s Death’ that stick in the mind. Masurenko’s fine ear for colours, combined with Borisovsky’s idiosyncratic fingerings, uncannily evokes the illusion of Prokofiev’s orchestral palette. Shostakovich’s last composition also receives a flowing, eloquent reading, the subdued emotionality of which would have met with the composer’s approval.

Gennady Banshikov (b.1943) has been associated with the St Petersburg Conservatoire as both student and professor. His short Viola Sonata is an early, one-movement work with Schoenbergian influences that packs a mean punch in seven intense minutes. Masurenko and Roglit Ishay make a persuasive case for it, aided by a vivid recording that captures their every nuance. Vol.1 of this series – featuring music by Glinka, Tchaikovsky, Rimsky-Korsakov et al – was issued in 2010; hopefully it won’t be another four years before the series is continued.